Shortly after two protesters were murdered in broad daylight, the police raced to suppress their atrocities through coercion of the bereaved. 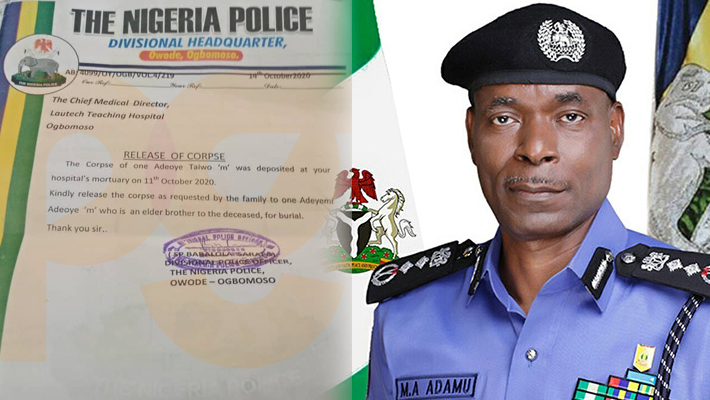 Two families who lost their loved ones after police officers fired live rounds into #EndSARS protesters in Ogbomoso on Sunday have come under unbridled police intimidation, Peoples Gazette can report, in a development that further spotlights the institution’s inability to atone for its decades of corruption and atrocities.

The police leadership stepped in after Taiwo Adeoye and Moshood ‘Akeju’ Abdulganiu were killed by officers, prevailing on their families not to pursue investigation into the killings, according to families and documents seen by the Gazette.

Babalola Sarafa, a police superintendent and divisional police officer in Ogbomoso, successfully hustled the families into swearing affidavits rejecting an autopsy on the victims and demanding their immediate burial, documents showed.

The families were also compelled to swear that they do not want the police murder of their loved ones investigated or prosecuted.

The DPO quickly wrote to LAUTECH Teaching Hospital, asking the chief medical director to immediately release the bodies to the families for burial.

But the plot was thwarted after Hussein Afolabi, a criminal law expert who has been advising the families, advised the families on the implications of going ahead with police’s scheme.

Mr. Babalola and the Force Headquarters did not return separate requests seeking comments from the Gazette Thursday evening.

A dignitary and a crime scene

Messrs. Adeoye and Abdulganiu were murdered by police officers when they joined other citizens to participate in the worldwide march to demand an end to police brutality in downtown Ogbomoso, a historic Yoruba settlement just 100 kilometres north of Ibadan.

While Mr. Abdulganiu was killed at the protest venue, Mr. Adeoye was murdered when residents besieged the palace of the town’s traditional ruler to mourn the dead and challenge police’s use of lethal force in responding to their protests, witnesses said.

The previous day, residents of the town had witnessed a similar chaos when police fatally shot Jimoh Isiaq, a 20-year-old technical apprentice. Mr. Isiaq was summarily buried in line with his Muslim faith, preempting autopsy.

But the circumstances that surrounded the killing of Messrs. Adeoye and Abdulganiu were more fluid and consequential for both the police and the Nigerian government.

For one, youth minister Sunday Dare was present at the palace when Mr. Adeoye was killed. He had made an emergency trip to Ogbomoso, his hometown, to condole with the families of Mr. Isiaq and encourage peace in the #EndSARS protest.

But when the community youth descended on the palace with the corpse of Mr. Abdulganiu, Mr. Dare’s police orderlies and soldiers reportedly opened fire in a bid to save their principal, killing Mr. Adeoye and wounding several others, witnesses said.

Shortly after he scurried out of the palace, Mr. Dare moved to take charge of emerging narrative out of Ogbomoso, tweeting without evidence that the protesters were hoodlums who tried to kill, maim and wreck the palace.

The minister’s tweetstorm was silent on how his orderlies opened fire, much less condolences and investigation.

A damning inquiry hushed up

The police’s handling of the matter and Mr. Dare’s apparent cover-up tactics provided a serious ground for a thorough investigation, but the police saw the families as less difficult to intimidate into helping them suppress autopsy, our findings showed.

Governor Seyi Makinde had promised a thorough investigation into the violence unleashed against the protesters by the police when he visited the deceased’s families on Tuesday, including an autopsy and ballistic examinations.

The police asked Adeyemi Adeoye, a member of Mr. Adeoye’s family, to swear affidavit for his body’s release without autopsy.

Fasilat Abdulganiu and Lawal Tajudeen, who described themselves as members of Mr. Abdulganiu’s family, also swore affidavit for the release of his remains without autopsy.

The affidavits were sworn between October 13 and 14, and Mr. Sarafa subsequently wrote to the chief medical director of LAUTECH Teaching Hospital to release the bodies.

But after Mr. Afolabi caught wind of the plot, he asked the families to withdraw the affidavit from the police and allow investigations to continue.
“The police have no powers to compel a family to swear affidavit against an autopsy,” Mr. Afolabi said. “We will ensure that justice is done in this case.”

The Gazette confirmed that LAUTECH Teaching Hospital had conducted autopsies for the victims and preliminary reports would be made public shortly.

The intimidation of both families came as Nigerians are demanding a thorough investigation into police’s handling of the #EndSARS protesters across the country, which Amnesty International said had left at least 10 killed by officers.

Although the government has yielded to protesters’ key demand and abolished the deadly and corrupt SARS unit, the marches have continued across the country as citizens demand an audit of police cells across the country, amongst other critical issues bordering on citizens’ rights.

“It is very difficult to believe that the police are genuinely committed to reforms if they are still coercing families to suppress evidence of their murderous activities,” Edwin Egede, a rights activist, said on Thursday. “If the police can try all this in some of the most-watched cases of their brutality against #EndSARS campaigners, then you wonder what they re doing with cases that are critical but not known to the public.