“What these latest revelations tell us is that both Tinubu and Osinbajo are two peas in a pod,” an anti-corruption campaigner said. 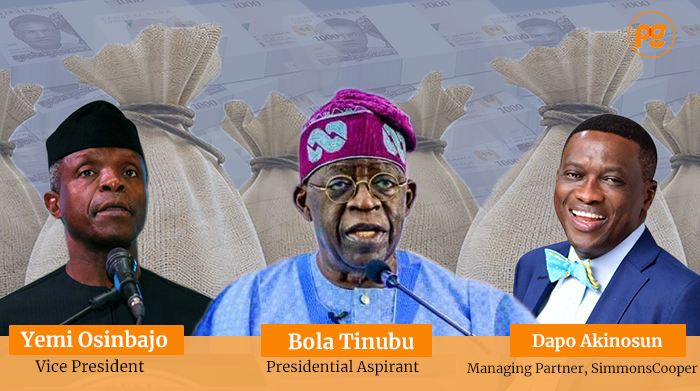 The records show that on April 26, 2013, Ocean Trust Limited transferred N25,001,050 into SimmonsCooper Partners bank account with UBA, contradicting SimmonsCooper’s categorical public denial in July 2019 that it never had anything to do with Ocean Trust in any capacity and for any reason. The firm also cleared Mr Osinbajo of any knowledge of Ocean Trust’s existence.

SimmonsCooper Partners, a white-shoe law firm headquartered in Victoria Island, was named as one of Mr Osinbajo’s businesses when presidential spokesman Garba Shehu listed assets of President Muhammadu Buhari and his vice in September 2015.

In 2018, ex-Alpha Beta Consulting managing director Dapo Apara came out with corruption and money laundering allegations against Mr Tinubu, a ruling party chief and 2023 presidential contender. Mr Osinbajo served as the attorney-general of Lagos when Mr Tinubu was governor between 1999 and 2007. Mr Osinbajo started SimmonsCooper Partners with other associates in 2007.

Ocean Trust was specifically mentioned in Mr Apara’s court documents as one of the firms allegedly used to siphon funds from Alpha-Beta, the controversial Lagos tax contractor whose financial activities have come under scrutiny amidst ongoing publications by The Gazette.

Following Mr Apara’s allegations, The Gazette obtained bank documents that showed how Mr Tinubu was moving billions from Lagos coffers into Alpha Beta and subsequently into Ocean Trust, a company without any traceable address.

Between January and June 2019, Ocean Trust summarily moved N16.4 billion from its operations accounts into a fixed deposit account, all domiciled at Wema Bank, our findings showed. The transactions were carried out by Yemi Adefarakan, executive director and group financial officer of Continental Broadcasting Service, owners of TVC News and other related media subsidiaries in Lagos and Abuja.

Additional bank documents showed how TVC’s 2013 expansion was financed with funds from Ocean Trust, an onshore shell venture that renders no services. Jonathan Zwingina and Kehinde Durosimi-Eti, two of the three people whose names appeared on company registration filings of Ocean Trust, denied knowledge of the firm when reached by The Gazette. Mr Adefarakan is the third name on the CAC filings.

Mr Apara said Alpha Beta received over N150 billion from Lagos, with most of it going into Ocean Trust. Mr Tinubu continues to deflect questions about his interest in Alpha Beta, but behind the scenes funds transferred to the firm from Lagos government accounts have been directly traced to his family members, business interests and political cronies.

The Gazette confronted SimmonsCooper with the evidence via telephone calls, emails and letters for several weeks, but the firm declined comments.

The Gazette reached out to Abidemi Oseni-Oduntan, a former partner at the law firm that had handled its bank accounts. He initially admitted knowledge of Ocean Trust, but afterwards called back to say he didn’t know of Ocean Trust and threatened to deal with our newspaper should this story be published.

The Gazette also reached Babatunde Irukera, a former partner at SimmonsCooper until 2017 when he was appointed to lead the Federal Competition and Consumer Protection Commission (FCCPC). Mr Irukera declined to confirm or admit knowledge of Ocean Trust throughout his years at SimmonsCooper despite repeated efforts to make him take a categorical position.

A spokesman for Mr Osinbajo declined comments about the newly-uncovered evidence linking Ocean Trust to SimmonsCooper at the time the vice-president was a senior partner there.

A spokesman for Wema Bank did not return requests seeking comments about the bank’s involvement in moving billions for a company that exists only on papers — or whether the transactions were reported to federal authorities.

Two peas in a pod

Last month, Mr Tinubu announced plans to run for president in 2023, saying he had informed Mr Buhari of his readiness to succeed him. About a week earlier, Mr Osinbajo also informed the president of his intention to take the top job.

Both camps have been pitted against one another in recent weeks, with Mr Osinbajo’s adviser Babafemi Ojudu publicly denouncing support for Mr Tinubu, a decision he said had earned him criticism and attacks from the politician’s supporters.

But notwithstanding their political differences ahead of a close primary contest later this year, Messrs Osinbajo and Tinubu are still widely seen as allies, especially given their steep history, said anti-corruption and political analyst Shola Olubanjo.

“What these latest revelations tell us is that both Tinubu and Osinbajo are two peas in a pod,” Mr Olubanjo said. “They have both been working together as partners for many years and Nigerians should not be deceived.”

After concluding his tenure as Lagos’ attorney-general, Mr Osinbajo continued to serve Mr Tinubu in several capacities, including as political and legal aide. His loyalty was rewarded in 2015 when Mr Tinubu nominated him as running mate to Mr Buhari.

“If they can be that close, then you know they will go to any length to cover up the shady deals they’ve done together,” Mr Olubanjo said. “Whatever they do in the coming months to get the presidential ticket, no one should expect them to open long-buried secrets of each other’s corrupt practices.”