The 2.4-meter-tall bronze monument was designed and cast by a South African sculptor. 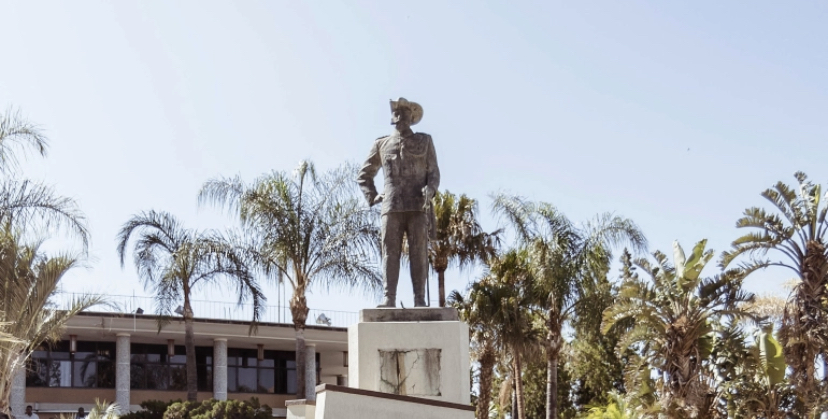 Following a historic Windhoek City Council vote on October 27, the peoples of Namibia have taken down a colonial-era statue of German colonialist Curt Von Francious, who was governor of the area between 1884 to 1915, in a bold move at what activists call decolonising the country’s public space and asserting historical accuracy.

During the height of apartheid colonialism in Namibia, an all-white City Council decided in 1965 to erect a statue in front of the Municipality offices in downtown Windhoek to honour the claimed “founder” of Windhoek.

The 2.4-meter-tall bronze monument was designed and cast by a South African sculptor.

The statue has stood on a pedestal outside Windhoek’s city buildings since it was erected to mark the city’s 75th anniversary of its founding, which was incorrectly attributed to Mr Curt.

The City Council made this momentous move in response to an earlier resolution in June 2021 to draft an all-encompassing framework on heritage matters.

While citizens of the South African country recall the role of Mr Curt in multiple massacres of natives, historians and activists also say that it was wrong to have credited him as the founder of the city.

Former Windhoek mayor Job Amupanda told VOA it was well-known that native people were living in the area decades before the Germans arrived.

“First of all, people think it is a process to decolonize our space. But before we even go there, we are simply saying the statue is a representation of the lie, historically. And because it represents a lie, there is no argument about keeping, protecting, and sustaining a lie,” Mr Amupanda said.

Hildegard Titus, an activist with the Curt Farewell Movement, said the statue was a distortion and whitewashing of history and correctrd a historical wrong.

“I think it is important to say that the statue being put up is a distortion of history cause like was mentioned, he wasn’t the founder of Windhoek. But also, when the statue was put up, it was five years after the forced removals of the Old Location, so it was very much a symbol of whitening the city,” Ms Titus told the AFP news agency.

She added, “This moment is a recollection of dignity; our city has been white-washed. There is an emotional tie to the statue being taken down, but it also has to do with historical accuracy.”

Germany, in 2021 acknowledged its mass murdering of Namibian natives and described it as a massacre for the first time while agreeing to fund $1.3 billion in developmental projects over the period of 30 years to compensate for the killings as well as lands and resources that were stolen.

Some of the country’s citizens have, however, protested the negotiations as lacking popular representation and participation. Namibia has now asked Germany to renegotiate the redress but Berlin has not agreed.

The Curt statue was moved to Namibia’s Independence Musuem where it will be displayed not as a glorified founder of the city of Windohek but as a symbol of the peoples brave resistance against domination and historical distortion.