“A case of murder and attempted murder has been opened. We will follow it up until the perpetrators are arrested and made to account for their crimes.” 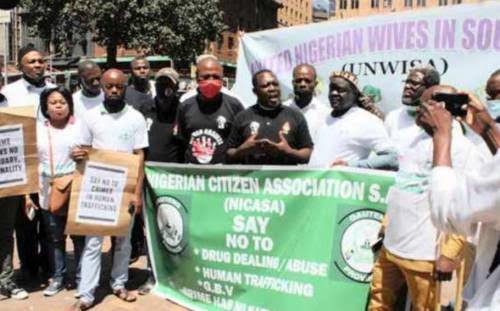 The Nigerian Citizens Association in South Africa (NICASA) has described the alleged recent killing of Nicholas John, a Nigerian in that country, as regrettable, accusing South Africans of taking the law into their own hands.

NICASA president-general Benjamin Okoli, on Thursday in Abuja that a meeting between Nigerian and South African authorities was ongoing to unravel the true cause of Mr John’s death.

According to him, NICASA leadership in Northern Cape province had a meeting with the police station commander.

“The death of our national is highly regrettable. We consider it one death too many. South Africans have resorted to taking the law into their hands, which is unlawful and must be stopped by the authorities. The attack on foreigners, particularly Nigerians, is driven by xenophobia and self-hate. We find no other words to describe it rather than what it is,” explained the leader of Nigerians in South Africa.

He added, “John is a responsible Nigerian who does not get involved in crime. A South African known to the deceased sold a laptop to him, and John was not aware the laptop was stolen. When the owner came with the guy who sold it to John, arguments ensued, after which our late brother agreed to pay the worth of the laptop.”

He explained that the association had officially informed the Nigerian high commissioner, Manta and the consul general, Abdukmalik Ahmed, about the killing.

“A case of murder and attempted murder has been opened. We will follow it up until the perpetrators are arrested and made to account for their crimes. Our leadership is on the ground in Kimberly Northern Cape province and has advised Nigerians to be of good conduct and behaviour and not engage in criminality,” he added.