As 2021 drags to a close, the pervasive black soot will inevitably mean a black Christmas for not a few hapless Rivers residents… 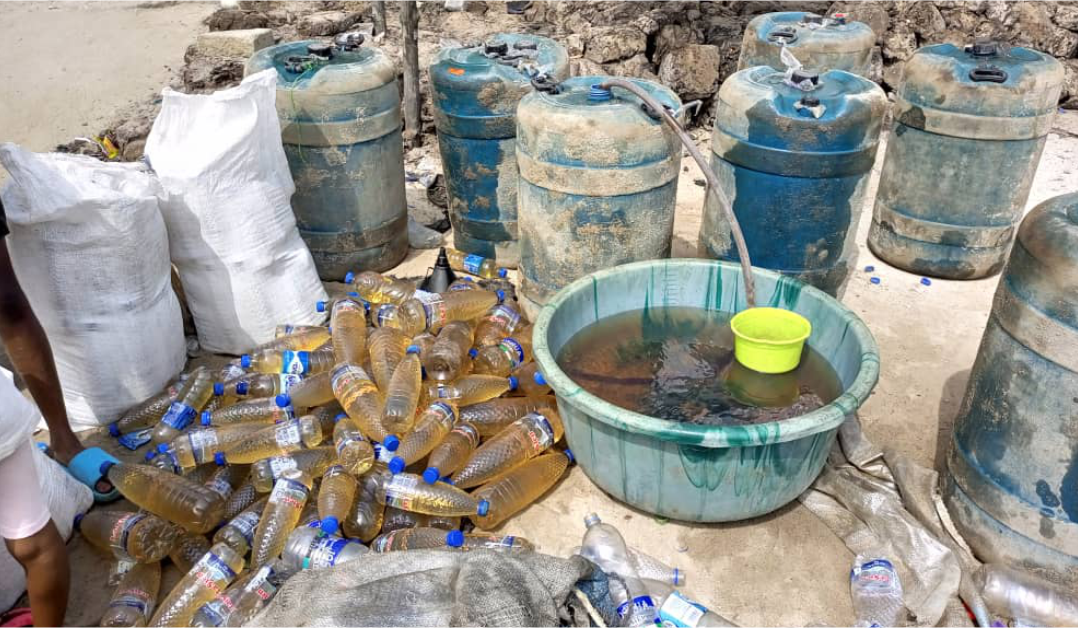 Since 2016, when black soot became prevalent in Rivers, residents, environment activists, and NGOs have clamoured for the government’s intervention to avoid a health disaster.

Reports have revealed that lung and skin cancers are higher in the state than in other parts of Nigeria.

With the increased activities of artisanal refining in the state, popularly known as “kpofire,” there is more cause for concern as black soot pervades the atmosphere in Port Harcourt, the Garden City.

It is raining soot in Rivers as cars, cloths, and surfaces turn black in less than a minute. Washing hands regularly and using a face mask can be life-preserving as serious health concerns accompany the black soot.

Black soot is a byproduct of the incomplete combustion of the carbon product. Over 20,000 people have suffered from respiratory-related ailments within the last five years, according to the 2019 peer-group scientific research headed by ex-Rivers Commissioner of Environment Roseline Konya.

The research was based on a hospital review of 22,077 patients, including women and men, who received treatment for soot-related conditions, some suffering from respiratory, skin, reproductive problems, etc. According to the research, more people will have cancer and non-cancerous disease from the soot.

Those benefiting from the artisanal refining have continued to make huge profits to the detriment of residents faced with health complications arising from the activity that has caused the increasing rain of black soot daily.

Peoples Gazette’s findings revealed that the crude is mostly ‘cooked’ inside different creeks across the state. The river’s mouth connecting the sea to the village settlement is a loading depot.

She added, “As I speak with you now, my son is sick and crying of throat pain because of this constant inhaling of black soot. I had just finished bathing, entered my car and drove to my office, a short distance from my house. My hand had already turned black.”

Rivers youths, colluding with security operatives, including the navy, army, and the NSCDC, engage in illegal refining of crude by greasing the palms of the security agents.

“It is better than stealing,” one of the illegal refiners told The Gazette at New Road in Borikiri. “Police worry us a lot here to give them money for settlement or else they will arrest us.”

Policemen are accused of escorting oil thieves to prevent patrol teams from arresting them. Some buyers of petroleum products, mostly kerosene, securely tie their product inside white polythene bags tucked inside a bus or taxi.

Illegally refined kerosene sellers can be found at New Road. One was sighted recently with kerosene stored in 10 white polythene bags carefully kept in a taxi, in the boot and under seats.

At the Mile 1 flyover park, in front of Isaac Boro Park, a taxi ferrying illegally refined kerosene was stopped by the police conducting a stop-and-search operation. The taxi was left off the hook, following an apparent greasing of the cops’ palms.

However, most vehicles carrying illegal crude usually avoid driving under the Mile1 flyover, preferring to take other routes less patrolled by security operatives.

A human rights activist, Celestine Akpobari, told The Gazette that the black soot results from the combination of emissions by oil-producing companies who flare gas while looking for crude oil, construction companies, and the illegal refining activities by youth aided by security personnel.

The army and NSCDC did not reply to The Gazette’s calls and messages requesting comments on the bribery allegations against the security agencies. But the police said they could neither deny nor confirm the allegation of corruption against cops in Rivers.

“I can’t say what you are saying is not correct, or it is correct either way. But the most important thing is that If you have a case in point, then let us know. If you are aware of a case where the police are involved, let us know,” Nnamdi Omoni, the spokesman for the police command in Rivers, told The Gazette.

“We have bad eggs in our midst, but we can’t condemn the entire police because of one single bad egg in the basket,” Mr Omoni pointed out.

Mr Omoni stressed that the police will not condone bribery and corruption and that “if anybody goes against the Police Act and regulations,” the cop will be singled out and punished.

“Even if it is me, I will be dealt with,” he assured. “If you have any case or someone told you, let us know. We will investigate it.”

The rights activist has someone else to blame. It is the individual saddled with the security of the state and the well-being of the residents.

According to Mr Akpobari, Governor Nyesom Wike ignores residents’ complaints about the soot.

“As important as the environment is, the Rivers state governor has yet to appoint a commissioner after the last commissioner was sacked for holding discussions with companies involved in pollution,” Mr Akpobari further explained.

The activist pointed out that the governor should know that “people are dying.”

“I have a friend whose daughter stays in Lagos. Whenever she returns to Rivers state, she falls sick. But when she returns to Lagos she gets better. Recently, her test result showed she is suffering from the impact of black soot,” he disclosed.

Several residents have taken to social media complaining about the soot filling their homes, especially during the harmattan season. The soot has made cleaning their homes an arduous task that is unending as the black soot sifts into homes, buildings easily, even with windows and doors closed.

Residents between a rock and a hard place

A professor of Atmospheric and Climate Science, Vincent Weli, explained that the harmattan season has intensified the effect of black soot in the state.

“The locally induced problem we have is the illegal refining activities that are causing the soot we are seeing. It was already a local problem we had before the harmattan season,” noted Mr Weli. “And, now that the harmattan season is here, it comes with a wind that is dry and dusty from the Sahara deserts that usually comes around this period yearly.

Mr Weli, an expert in air pollution meteorology, mentioned that the wind that blows down comes with suspended particulate matter in the atmosphere, ranging from one to 10 micrometres.

“They are so tiny that you can breathe them in without the nostril stopping them, although some are captured by the nostril,” he stressed. “These suspended particulate matter is now joining forces with the illegal refining activities causing carbon.”

It is the reason, he explained, sickness and many hospital admissions are recorded from the combustion of suspended particles.

“The dust is mixed with the soot caused by the local problem, and they are both gravitating the incident of respiratory tract infections,” added the environmental scientist. “People are having so much catarrh, headache, coughing because of inhaling black soot.”

However, Mr Weli urged the Rivers government to declare a state of emergency on the air, advising residents to protect themselves by wearing face masks.

“Emission must be checked and stopped henceforth if we must curb these incidents,” he further warned. “People must begin to wear nose masks even though it is discomforting, and whoever sees any symptoms of nausea congestion should seek medical attention.”

Male residents are at risk of becoming infertile due to the pervading black soot, said medical practitioner Dienye Briggs at the ‘Stop The Soot’ conference, organised by the Rotary Club of Port Harcourt in December.

In March, Mr Wike sacked the environment commissioner Igbkis Tamuno which many attributed to a conference, ‘On Soot and Air Quality in Rivers State’, held by Mr Tamuno. The governor has not replaced him.

Information commissioner Paulinus Nsirim did not reply to The Gazette’s text messages and calls requesting comment on the Rivers government’s plan to tackle illegal refining of crude.

In 2018, Mr Wike accused security agents of causing the spread of black soot in Rivers and President Muhammadu Buhari’s regime of turning a deaf ear when his administration lodged several complaints.

As 2021 drags to a close, the pervasive black soot will inevitably mean a black Christmas for not a few hapless Rivers residents caught in the crosshairs of poor governance and corrupt security agencies.