An articulated vehicle rammed into a petrol laden tanker which had blocked the highway. 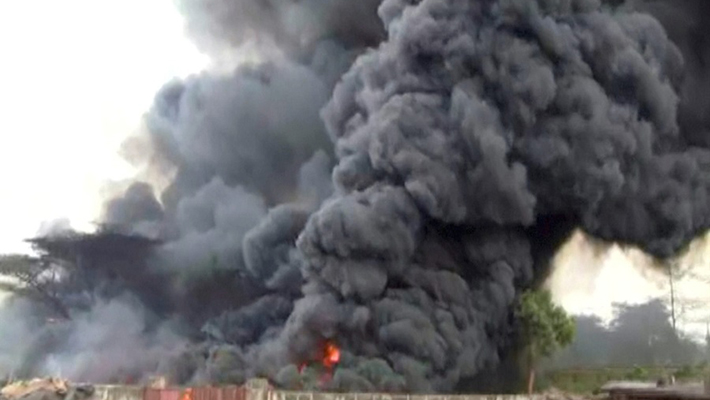 Smoke billows into air following an explosion of a fuel tanker in Morogoro, Tanzania August 10, 2019. Channel Ten/Reuters TV via REUTERS ATTENTION EDITORS – THIS IMAGE HAS BEEN SUPPLIED BY A THIRD PARTY. NO RESALES. NO ARCHIVES. TANZANIA OUT. NO COMMERCIAL OR EDITORIAL SALES IN TANZANIA.

The Federal Road Safety Corps (FRSC) on Thursday confirmed 11 persons dead and seven others seriously injured in an accident involving a petroleum-laden tanker and others.

A witness told NAN that the first accident occurred around 3:00 p.m. when a truck rammed into a stationary vehicle at a military checkpoint due to brake failure, killing one person at the spot at Ochadamu village, along Ajaokuta-Itobe-Anyigba road.

“While the military personnel were trying to sort out that incident, a truck driver was busy videotaping the incident, a situation which angered the personnel, who seized the phone.

“Other truck drivers around protested and demanded that the phone be released to their colleague without further delay,” he narrated.

The witness said that one of them (drivers) drove his tanker laden with petroleum and crossed the road, thereby blocking the highway and swearing not to move it away until the phone was given back to the owner.

But shortly after the petrol tanker blocked the road, another articulated vehicle, filled with coal, lost control due to brake failure too and rammed into the tanker, which exploded in flames that left several persons burnt beyond recognition.

Mr Dawulung confirmed 12 vehicles, including trucks and six motorcycles that were also burnt down by the inferno that occurred at Ochadamu village along Ajaokuta-Itobe-Anyigba road, Kogi.

He said that the corps’ personnel, who rushed to the scene were able to rescue some trapped commuters and the injured rushed to hospitals for medical attention.

“Already, six of the injured persons have been taken to Holy Memorial Hospital, Ochadamu, while one person was taken to the Federal Medical Centre (FMC), Ajaokuta for medical attention.

“It’s  sad that 11 persons died in these unfortunate road accidents that occurred at a spot due to human carelessness,” he said.

The sector commander said that the corps had been warning motorists to always check the road worthiness of their vehicles before embarking on a journey but it seems they are not obeying.

He described the incident as “shocking” calling on motorists to always keep to the safety rules and regulations to avoid such carnage and wanton destruction.