The Ondo state governor has described Mr Emefiele’s decision to run for president as “brazen” illegality. 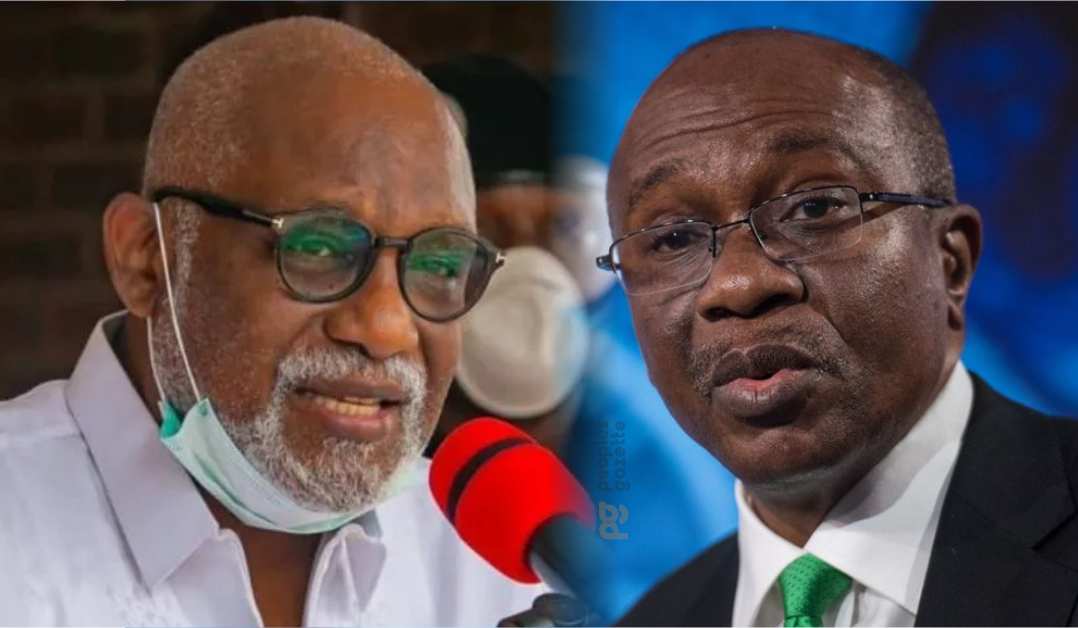 The Governor of Ondo state, Rotimi Akeredolu, has demanded that the Central Bank Governor, Godwin Emefiele, drop out of the presidential race or resign from his position.

On Friday, Mr Akeredolu said in a statement that Mr Emefiele’s interest in the 2023 presidential race and partisan politics would distract him from leading the country’s apex bank, adding that it was dangerous for Nigeria’s economy.

“The news of the purchase of Declaration of Intent and Nomination Forms to contest for the office of the President in the forthcoming general elections, on the platform of the All Progressives Congress, purportedly by the supporters of the Governor of the Central Bank of Nigeria, Mr Godwin Emefiele, has been received with palpable disbelief and shock by many Nigerians. This act, if unchecked, timeously, portends great danger to the fragile economy of the country,” Mr Akeredolu said in a statement posted on Twitter.

Mr Akeredolu described Mr Emefiele’s actions as “brazen”, adding that it was difficult to imagine. While acknowledging Mr Emefiele’s right to political association, he calls out the illegality of actively participating in politics while holding his current position.

“The combined effect of the Public Service Rules, CBN Act and the 1999 Constitution, as amended, exposes not only the oddity inherent in this brash exercise of presumed right to associate.

“It also confirms the illegality of the act should he proceed to submit the forms while occupying the seat as Governor of the Central Bank of Nigeria,” Mr Akeredolu wrote.

On Friday morning, Peoples Gazette reported that Mr Emefiele had picked up the presidential nomination form of the ruling APC, pegged at N100 million.

The Gazette had earlier reported that pictures of campaign vehicles bearing Mr Emefiele’s photos had been circulated online, but the CBN governor issued a statement dissociating himself.

Last month, The Gazette also noted the registration of Diaspora for Emefiele Limited, an organisation in the United Kingdom to push Mr Emefiele as the next president of Nigeria, marking another first in a string of breakaways from long-held customs of public accountability under serving President Muhammadu Buhari.