Mr Mohammed said the deployment of fake news as campaign tools by opposition parties was worrisome and must be ended. 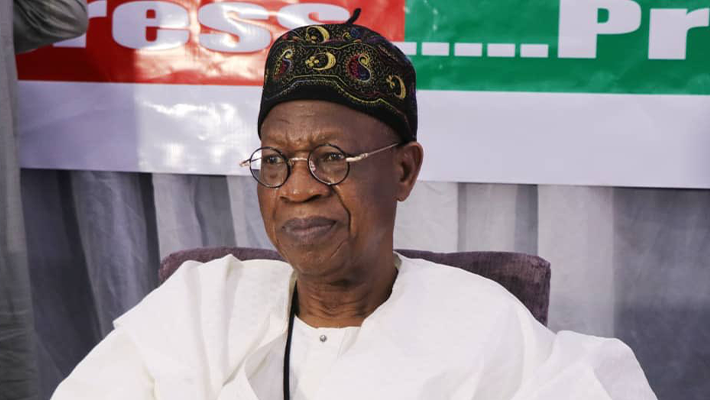 President Muhammadu Buhari’s regime has accused opposition parties of using fake news and disinformation to prosecute the campaigns towards the 2023 general elections.

The Minister of Information and Culture, Lai Mohammed, made the accusation on Tuesday in Abuja at the fourth edition of the ‘President Muhammadu Buhari Scorecard 2015-2023′ series.

In opening remarks, Mr Mohammed said the deployment of fake news as campaign tools by opposition parties was worrisome and must be ended.

He charged the media to be cautious of the effects of fake news and disinformation and desist from allowing their platforms to be used for its purveyor.

“If the opposition has suddenly realised that they cannot match the ruling party in a free and fair election and have thus decided to weaponise fake news and disinformation, the media should not allow itself to be used for that nefarious purpose.

“We have all seen the damage done to elections in other climes by fake news and disinformation.

“No government will sit by and allow anyone or any organisation to use fake news and disinformation to sow the seeds of discord,” he said.

The minister also noted that the increasing resort to fake news and disinformation by a section of the media was becoming a great threat to the success of the 2023 general election.

“It is generally assumed that thuggery, insecurity, vote buying, attack on INEC facilities, etc., are the biggest threats to the elections, but fake news and disinformation

constitute an equally-potent threat because they are capable of hampering the success of the polls,” he said.

Mr Mohammed gave instances where disinformation and fake news were used against the ruling All Progressives Congress.

“In recent times, we have all witnessed how a letter purportedly from INEC was used to cast aspersions on the candidate of the ruling All Progressive Congress (APC).

“Shortly after that, the death of an innocent man was turned into a political tool to further attack the same APC candidate.

“Of course, there have been other cases similar to the two I have just enumerated. This is a dangerous development which must be nipped in the bud,” he said.

He recalled that his ministry launched a national campaign against fake news, disinformation and hate speech in 2018, with strategies of persuasion and enlightenment rather than coercion.

The minister, however, expressed disappointment that the efforts did not deter those bent on using fake news and disinformation as tools of destabilisation, destruction and distortion.