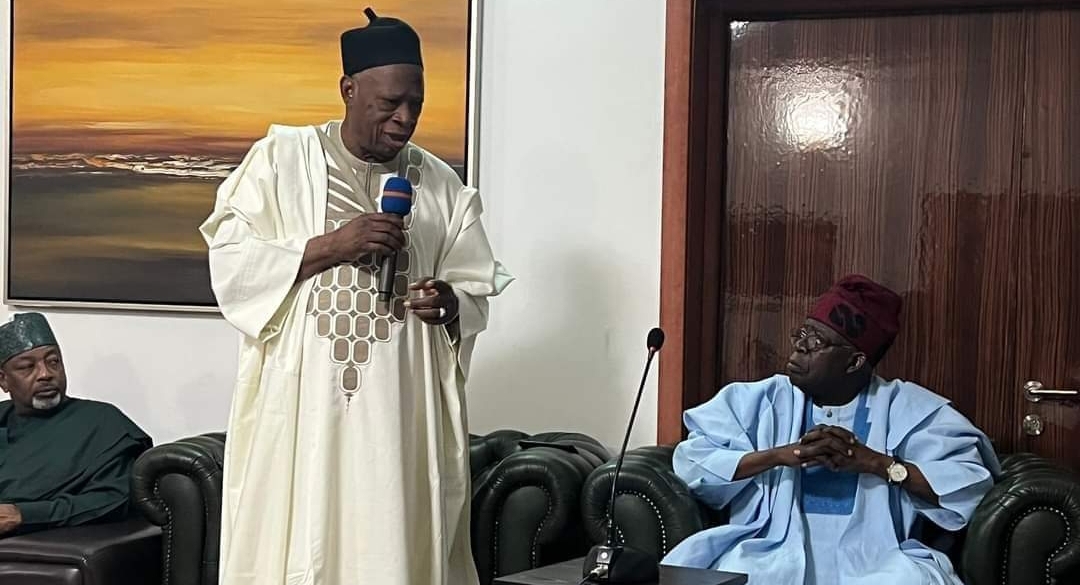 APC national chairman Abdullahi Adamu, has assured the party’s presidential candidate Bola Tinubu of his loyalty and that of other APC stakeholders to help him win the 2023 presidential election.

“We are all now your soldiers. We will follow you to all the nooks and crannies of this country and we will not rest on our laurels until we have delivered you as president,” said Mr Adamu.

Mr Adamu had vehemently opposed Mr Tinubu’s emergence as APC’s presidential candidate, declaring Senate President Ahmad Lawan as the party’s consensus.
The APC chair made the pledge in a statement by Mr Tinubu’s spokesperson, Tunde Rahman, on Thursday in Abuja. Mr Rahman stated that the APC chief gave the assurance when the party’s national working committee members visited Mr Tinubu to congratulate him for winning the party’s presidential ticket.
According to him, the party’s leadership will work to deliver Mr Tinubu as president.

“We thank God for giving you to us and to all Nigerians and by making you the presidential flag bearer of our party for the 2023 election. You have come a long way; you have seen it all. I can tell you that we have a commitment beyond description, a commitment to deliver you as president,” said Mr Adamu. “Our party has spoken loud and clear, and delivering the will of the people, our delegates have given you the mandate to lead.”

Responding, Mr Tinubu thanked the APC chairman and members of the NWC for the honour.

The APC presidential flag bearer said the committee had formed a dynamic team in a short period of time and as such, sent jitters to other parties that the party remains united.

Mr Tinubu urged them to continue to live up to expectations, “as I have done throughout my campaign.”

“We have begun a new story of greatness, prosperity in the history of our nation. You helped me to complete the introduction, we must now work together to etch the substance of the book itself,” stated Mr Tinubu. “Our book will not be complete until you have delivered me as president.”

He described the APC chairman as straightforward, focused and courageous and added that Mr Adamu had worked with him in the class of 1999 governors.

“I thank you and I reiterate my commitment to the greatness of our party. We must work together, we must not let our enemies who want to divide us succeed. We must not allow it. Almighty Allah will crown our work with success as we embark on the journey to a greater Nigeria,” Mr Tinubu stressed.