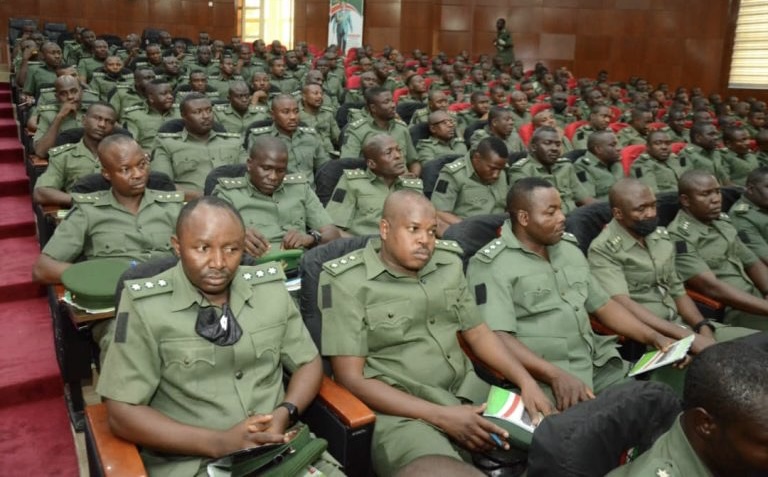 The Deputy Director, Army Public Relations,Training and Doctrine Command, Nigerian Army (TRADOC), Colonel Muhammad Dole, made this known in a statement issued on Monday in Kaduna.

Mr Dole reported the Commander TRADOC NA, Major-General Stevenson Olabanji, the president  of the examination, as urging members of the examination panel and directing staff to continuously uphold the virtue of integrity and good character.

The commander drew their attention to the absolute need to uphold the sanctity, security and integrity of the examination process throughout the period.

Mr Olabanji said there was a need to produce officers with impeccable character, capable of tackling the contemporary security challenges bedeviling the country.

He explained that the commander made the statement while addressing members of the examination panel and observers on Sunday, at the Ihejirika Auditorium, Jaji, Kaduna State.

He said in line with the Chief of Army Staff (COAS) vision, the onus had been placed on TRADOC to create a new regime for realistic training for the Nigerian Army, hence army training institutions were being repositioned to train officers and men who could collectively achieve the objective.

He tasked members of the team to stay above board in conduct, integrity and uprightness, as the examination was not meant to weed off officers from the service, but to improve their capacity and capability in discharging their constitutional responsibilities.

He added that they were selected based on their known abilities and uprightness, thus they should uphold the trust the system had in them by diligently carrying out their tasks without prejudice.

The examination president advised the candidates to be diligent and hard working in pursuing their careers and academic excellence within the ambit of the law, as there was no short cut to success.

He urged them to carve a niche for themselves while adapting to the dynamics of modern day warfare.

He reminded them that their good performance in the examination was a key determinant in the progression of their chosen career in the army.

He also assured them of fairness and transparent assessment, pointing out that there was nothing to fear as the members of the examination panel and directing staff were men of integrity and good character.

He, however, advised the candidates to put in their best, be focused and avoid any form of distractions.

Mr Olabanji equally warned that the army had zero tolerance on cheating, aiding, abetting and any form of examination malpractice.

He said the SSCQE was a promotional examination as well as a gateway to attend the Senior Staff Course for the NA officers of the rank of Captain to Major.

He said the Infantry Corps Centre (HQ ICC) would ensure that the security and administration of all participating members were adequately handled.

He expressed the preparedness of the HQ ICC to make the examination the best conducted in recent times.

The Commander thanked the COAS for providing adequate logistics required for the hosting and smooth conduct of the examination.

Mr Dole said present at the event were the Chief of Training TRADOC NA and examination coordinator 1, Major-General JAL Jimoh, representatives of Army Headquarters’ Departments of Transformation and Innovation, Army Standard and Evaluations, among others.