90% of Nigerians killed by security forces in South-East innocent: Report

At least 90 per cent of Nigerians killed by police officers in the South-East were innocent as federal government’s security forces lay siege on states in the region. 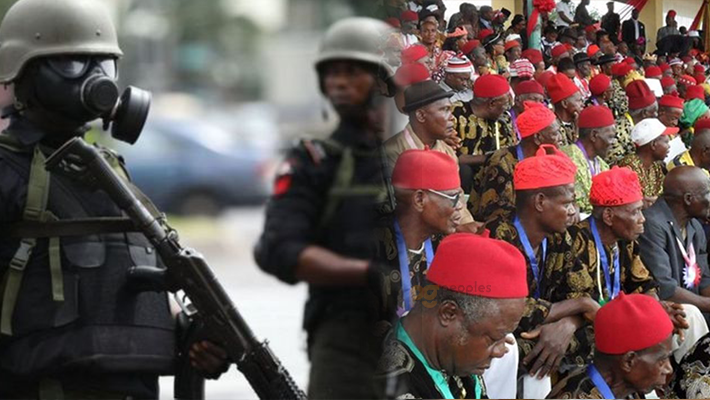 At least 90 per cent of Nigerians killed by police officers in the South-East were innocent as federal government’s security forces lay siege on states in the region amid secessionist threats and unknown gunmen’s violent attacks on public facilities and security operatives.

The security forces have identified the unknown gunmen as IPOB and ESN, often leading them to vicious crackdown on youths in the region.

A telling report by the International Society for Civil Liberties & Rule of Law (Intersociety) in its latest report revealed the wanton liquidation of innocent lives.

“Not less than 600 were disappeared or feared killed in the captivity of the military; that over 90 per cent of the victims of the above conduct atrocities are innocent, falsely labelled and criminally stigmatised,” stated the Intersociety document.

The document accused Nigerian soldiers and police of turning “blind eyes on jihadist Fulani herdsmen attacks, including the recent massacre of not less than 150 defenceless” Igbo Christians. To date, it added, no single “jihadist Fulani herdsman involved has been picked and tried.”

Intersociety insisted in its report that over 90 per cent of police and military claims of “killing or arresting ESN/IPOB hoodlums, terrorists, supporters, charms provider-native doctors are false and unfounded.”

The chilling details of the report also showed that “out of over 350 victims of the military and police killings, less than 10 per cent of them were combatively involved.” According to the report, 60 per cent of the victims were killed “outside the law or ought not to have been shot and killed on account of being nonviolent at the time of their shooting and killing.”

“In other words, they are victims of deadly use of force,” was the terse conclusion of the document.

As of May 31, 2021, Nigeria’s security forces had arrested and incarcerated unaccounted for 2,500 individuals in various states across the South-East and South-South, including Enugu, Imo, Anambra, Rivers, Abia, Akwa Ibom, Delta, and Ebonyi. Most of the victims, Intersociety observed, were Igbo Christians.

The report further noted that 30 innocent persons were killed by soldiers who opened fire at the Ariaria International Market in Aba on April 23. Intersociety said more than 10 were killed at Enyeogugu, Abor-Mbaise, by the military on May 30.

On June 3, it claimed several other persons were killed and falsely labelled and 60 civilians “abducted or arrested” between June 10 and 17 in the nine states. Apart from apparent ordinary Igbos bearing the brunt of the security forces, the publication acknowledged that “traditional and religious leaders were abducted, killed, and falsely labelled.”

“Several highly respected traditional herbalists have also been attacked and abducted or killed extrajudicially by soldiers and police, including the DCP Abba Kyari’s IRT,” alleged the civil rights group. “Funny enough, witnesses have disclosed to Intersociety how the said security operatives dot their operational vehicles and bodies with deadly charms and hire malevolent medicine men to accompany them.”