It is not surprising that on 20th October 2020 and 12th June 2021 our oppressed youths reaffirmed their belief and conviction in their vision and mission. 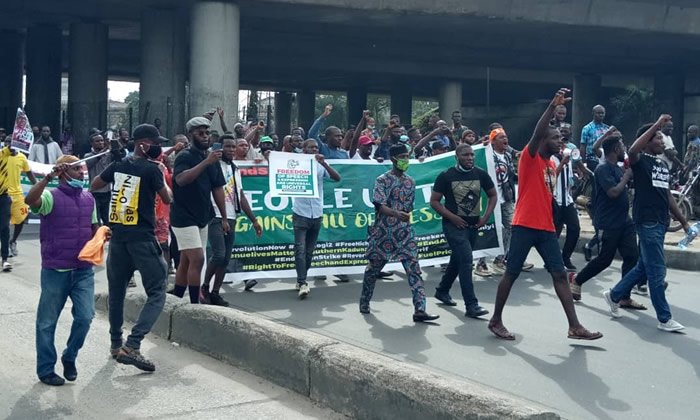 As the thinker, Frantz Fanon, once remarked in his seminal, ‘The Wretched of the Earth’ that “each generation must, out of relative obscurity, discover its mission, fulfil it, or betray it”, it is necessary to locate his vision not only as a subject of resistance against the repressive power that denies oppressed citizens their humanity but as a call to action to subjugated people burdened by the violent oppression that strips away their agency.

The clarity of his vision is best illustrated by the emphasis on those personal and collective tropes in which oppressed citizens commit themselves and their generations to programmes of action for discovering their historical missions, either fulfil them or betraying them. Nothing illustrates the logic of his vision other than his personal commitment to the struggle for liberation. This is how he puts it in another work, ‘Black Skin, White Masks’: “I was committed to myself and my fellow man, to fight with all my life and all my strength so that never again would people be enslaved on this earth”.

But, there are those at the head of the table of power who persuade themselves to believe that to undo the constitution is the best form of governance. They are the oppressors, transgressors, whose only purpose is to weaken the society and destroy the principle of the sovereignty of the people. Certainly, those who make a poor show of themselves, wreak a great deal of violence on the constitution, deny the citizens their inalienable and constitutional rights, destroy the foundation on which the society rests, end up erecting in its place houses of cards. Like the shrew, they set themselves up against the people, rubbing their venomous saliva on their skin in a soothing way and biting them.

Since Fanon’s vision is about taming the shrew with a certain fearlessness, refusing to compromise, occupying the state of mind of defiance, and raising the banners of resistance against oppression, our youths take on the moral urgency of his vision to tame the shrew, in order to fulfil their mission and not betray it. To fulfil this mission is to answer his call to action and take on the moral urgency of liberation if one is to become free.

Last week, across the streets of cities of our country and of major countries of the world, our oppressed youths embarked on the task of vacuum cleaning the nonsense that their oppressors and transgressors seek to preserve. They held and linked their hands together in defence of the constitution and country. They sought to tame the shrew in the streets, where they had no time for lamentations.

They marched, waved flags and their banners of resistance. As if propelled by the immortal words of the famous French orator, Comte de Mirabeau, “Go tell your master that we are here by the will of the people and we shall retire only at the point of the bayonet”, they sang and danced, sending their own messages of defiance to the potentate in Abuja.

Clear-eyed, they drew from their moral cores the power of self-expression and self-assertion which constantly yields the ideal of what our country should be, ought to be and must be – the ideal that our country does not and cannot give itself freedom – and that it is their historic task to set the country free from all forms of oppression and walk it on the path of freedom. How can one make this point clearer?

One important point to note here is that his view, like the views of many youths who were on the streets on June 12, aligns with the vision that conferred upon them the need not to be silent. The point he makes, in effect, is that the vision of liberation can only be made manifest, declared, revealed by the fire of the streets, and not by keeping silent in the face of tyranny.

He is damn right.

Every man’s work shall be tried by fire, and every man shall know every man’s contribution to the making of the vision. The making of a vision isn’t possible if every youth condemns self to silence, lives in the bondage of see-no-evil, hear no-evil, and do-nothing, distances the self from the moral urgency of the collective vision, betrays the mission, and contrives “one-chance arrangement” with the oppressors, like the misguided youths who were caught on camera in Abuja fighting over peanuts and the mess of porridge handed to them by this oppressive government to show support for it.

This, for me, is one of the important takeaways from the actions of our youths last week: the defiance they showed in the streets and the resistance they mounted in the face of all odds highlight a certain conviction that it is only the oppressed that can liberate themselves. And if anything is truer, it is that they are not prepared to hand their future, destiny, hope, and the fate of our country to a clueless potentate.

Theirs is a consciousness of liberation that rebels against slavery. As one protesting youth eloquently captured it, “I prefer to be a rebel than be a slave”.

So, here today, we are dealing with a generation of oppressed youths who, as liberators, are willing to break the chains that shackle our country. When they converged in Lagos, Akure, Ibadan, Calabar, Port Harcourt, Ijebu-Ode, Benin City, London and New York, as many more trended hashtags online, they reminded me of the protagonist, Arkady Dolgoruky, of Fyodor Dostoevsky’s novel, ‘A Raw Youth’, who was torn between the love for his father and the overwhelming desire to confront him with his sins.

Like Arkady who travelled to St. Petersburg and confronted his father with his sins, our youths travelled from far and wide and seized the streets of our country and the world just to confront our country with the sins of rulers who welcomed them with every conceivable instrument of violence. In the streets, they showed love for our country as they flew flags and confronted our sinful rulers with placards, even at the risk of death.

Casting my gaze back to glimpse the events of last week, there is something sublime about the way our youths mobilised themselves into the streets to fulfil the promises of history and achieve the ultimate goal of rescuing our country from political bandits and elite kidnappers that have seized it for ransoms. This sublimity lies in the way they put their bodies forward in the defence of their vision, even with death as the inescapable result. Doubtless, there is something worthy of admiration in our youths that has parallels in history. The memory of brave youths who stormed the national parliament in Lagos in 1962 to demand the abrogation of the Anglo-Nigeria Defence Pact is eternal portraits that overhang the wall of time.

But for the barn troopers, the Tafawa Balewa-led government was intent on forcing our country into an imperial arrangement that would have allowed the British to maintain military bases on our soil. Also, no one who lived through the 1980s, and indeed, after that, would forget the bravery and tenacity of our youths who confronted one military dictator after another in the streets. The best account of the confrontations is indeed the 1989 Anti-SAP Protests. In that year, our youths resisted the punishing World Bank’s economic programme of structural adjustment imposed on our people by General Babaginda.

It is not perhaps surprising that on 20th October 2020 and 12th June 2021, our oppressed youths reaffirmed their belief and conviction in their vision and mission, consistent with Fanon’s exhortation. In reaffirming their belief, they drew from the inspirations of the past, while drawing up their own catalogue of courage, inspiration, and actions, for which tomorrow will certainly learn a great deal.

If there are lessons we can learn from them, here they are: (1) that the oppressed must be their own liberators; (2) that every struggle is built on historical landmarks – that is, to see the road ahead more clearly in any struggle, it is imperative to look back at the road travelled by prior generations.

On both, dear youths, you are doing well. Fantabulous.