After winning the Dutch Cup, Ajax claimed the ninth “double” in club history, a Dutch record. 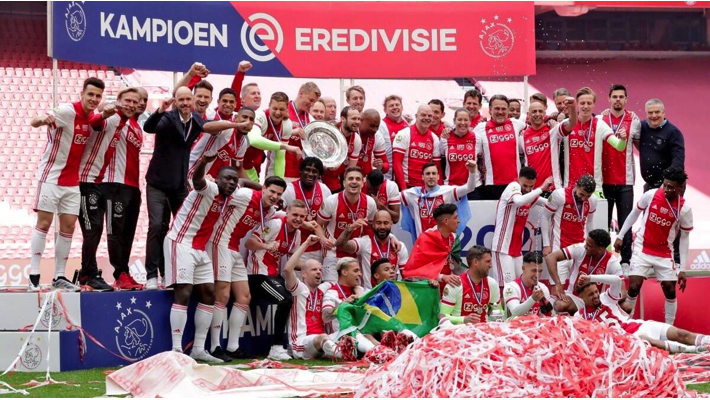 In an empty Johan Cruyff Arena, due to the COVID-19 rules, Ajax went in front through Jurrien Timber in the 10th minute.

After a mistake by Caner Cavlan, the 19-year-old found the net with a long-distance shot.

It took until the second half for Ajax to extend the score to 4-0 through goals by Sebastien Haller, Devyne Rensch, and Davy Klaassen. Ajax jumped to 79 points from 31 of the 34 match rounds, with rivals PSV and AZ mathematically unable to catch up.

After last season was cancelled due to the COVID-19 crisis, with Ajax top of the league, the Amsterdam-based giants were crowned the winners.

They captured their second title in three years under the reign of coach Erik ten Hag, who extended his contract until mid-2023 last Friday.

A few thousand fans had gathered outside the stadium, who ignored the health regulations, to celebrate, and the whole squad joined the fans from the parking deck after the match.

After winning the Dutch Cup, Ajax claimed the ninth “double” in club history, a Dutch record.