Mr. Tinubu is widely adjudged as the owner of The Nation, which neither he nor the outlet has denied several years on. 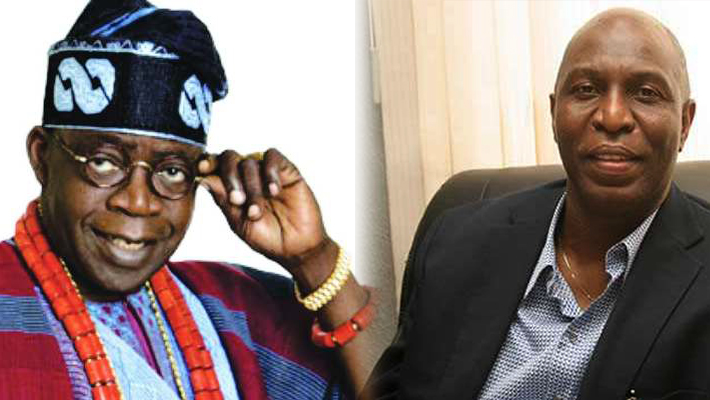 Bola Tinubu and Sam Omatseye, The Nation Editorial Board Chair

A statement of claim recently filed at the Lagos State High Court by Dapo Apara described how funds were moved in apparent money laundering from Alpha-Beta Consulting to businesses and individuals allegedly linked to Bola Tinubu.

Alpha Beta is a company that was previously a contractor to the Lagos government and managed the state’s internally generated revenue in exchange for a commission.

Mr. Apara was amongst the earliest executives of the firm, which has become controversial and has been accused of being a conduit that channels Lagos public funds into Mr. Tinubu’s political empire.

Mr. Apara claims in his statement that Alpha Beta illicitly transferred N1 billion to the company that publishes The Nation, and two other printing companies namely Afkar Printing Press and Lagoon Press Limited in 2017.

The document did not clarify the stated purposes of the N1 billion suspicious transfer or how much of it went to The Nation.

Mr. Tinubu is widely adjudged as the owner of The Nation, a claim neither he nor the company has denied after years of being in circulation. In Mr. Apara’s statement of claim, Mr. Tinubu is also described as a “controlling interest” in Alpha Beta Limited who hid his connection with Alpha Beta from the public.

An October 2 writ that circulated alongside the 40-page court documents dumped in the public domain overnight said Mr. Tinubu and Alpha-Beta must enter a defence in the matter within the next 42 days.

A management official at The Nation did not immediately return a text message seeking comment from Peoples Gazette Thursday afternoon. A spokesman for Mr. Tinubu did not answer telephone calls to his mobile.

Mr. Apara’s court filings come months after he accused Mr. Tinubu of easing him out of the company he founded.

He submitted a cornucopia of corruption allegations against Mr. Tinubu at the anti-graft EFCC, which has failed to expedite its probe into the matter.

Since 1999, Lagos has had successful administrations that are loyal to Mr. Tinubu, who left office himself in 2007 after two terms.

The state has continued to shield its use of public funds from the taxpayers, and multiple court orders to comply with freedom of information and other transparency laws are frequently ignored.