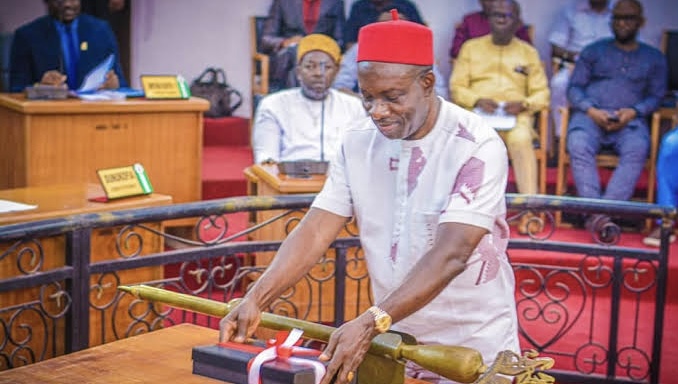 Governor Chukwuma Soludo of Anambra on Thursday presented a budget of N258.9 billion for 2023 to the state House of Assembly for approval.

Presenting the budget tagged “Budget of Acceleration”, said that the figure was higher than the 2022 budget of N170 billion, with about N89 billion.

Mr Soludo said that the budget has a deficit of N13 billion.

“So far, we have not borrowed a kobo; we have however applied for N90 billion out of the approved N100 billion, and when it comes, we plan to roll it over as part of the 2023 financing.

“As a reflection of our people’s priority needs, about N91.8 billion or 56 per cent of the total capital expenditure is devoted to roads, transport, power and urban regeneration that the average citizen can feel, see, or use.

“Education, health, youths, and women and vulnerable groups have their capital votes more than doubled.

“We appropriately budgeted for counterpart funding to catalyse resource inflows from our partners and expenditure on security remains barely unchanged in spite of increased challenges,” he said.

Mr Soludo said global supply disruptions as a result of war in Ukraine had immense consequences on nations including Nigeria.

He identified exchange rate shocks, disruptions and declining oil production as other challenges.

The governor described the recent flooding as a national emergency which engulfed more than 50 per cent of the state land mass, dislocating hundreds of thousands of families and destroying lives, farms, assets and livelihoods in its wake.

“These added to the existing challenges of insecurity and criminality, road and traffic crisis, impunity and lawlessness, touting, air pollution, urban blight and low fiscal revenue.

“Daunting as the above may seem, we remain resolute with our eyes firmly focused on the ball,” he said.

The budget was referred to committees for sectorial dissection following adoption of the first and second motions.

Uche Okafor, Speaker of the House, commended the governor for his leadership qualities.

He promised that the House would do due diligence on the budget to ensure its speedy passage.