At least five delegates from both states told The Gazette in separate interviews Tuesday that they were offered American banknotes to support Mr Tinubu and the vice president. 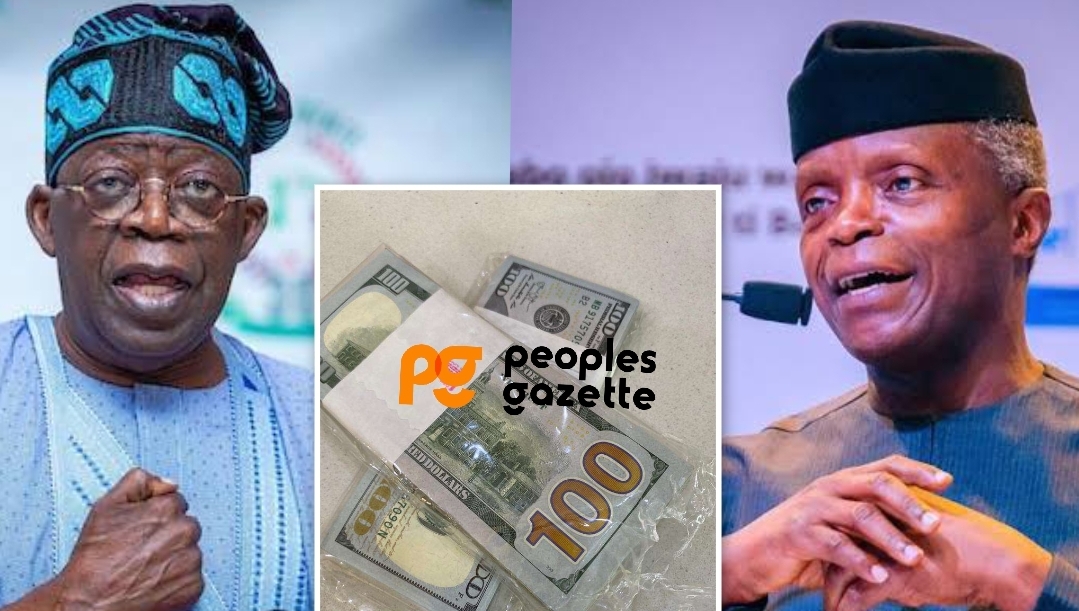 Delegates from Adamawa and Ogun have disclosed to Peoples Gazette that they received cash gifts from Bola Tinubu, all but offsetting doubts over earlier expectations that the ruling All Progressives Congress’ presidential primaries would be grossly monetised.

At least five delegates from both states told The Gazette in separate interviews Tuesday that they were offered American banknotes to support Mr Tinubu and Vice President Yemi Osinbajo. The delegate provided information under anonymity to avoid being accused of anti-party conduct that could carry severe disciplinary measures.

Whereas Mr Tinubu gave Ogun delegates $25,000 each to induce his acceptance as the party’s presidential flag-bearer tonight, Adamawa delegates said they received $10,000 each from Mr Tinubu’s surrogates. The delegates have converted on Abuja starting last week ahead of the primary scheduled to be held June 6-8.

“Ashiwaju’s people came here and they said we should support him because he has the best chance to defeat Atiku Abubakar,” a delegate told The Gazette. “Then they said they didn’t come empty-handed.”

Delegates from Ogun confirmed getting $25,000 from the former Lagos governor. They, however, said they rejected $5,000 from Vice President Yemi Osinbajo’s surrogates.

“The vice-president’s people initially said he didn’t have any money to give and advised everyone to vote their conscience,” a delegate said. “But suddenly they came back to say he wanted to give us $5,000 to support our transportation and hotel accommodation.”

The delegates admitted they rejected the money because it was smaller than what Mr Tinubu, perhaps the biggest contender for the ticket, had already offered. The delegates shared pictures of the cash gift they said came from Mr Tinubu with The Gazette.

At least one delegate claimed being shortchanged by Mr Tinubu’s surrogates.

“I don’t know what happened but they only gave me $9,000,” the politician said. “I am working now to get the balance from the person they sent to us.”

The Gazette was unable to clarify how much other aspirants have offered delegates. At least five aspirants are believed to remain in the race amidst intense horsetrading. Rotimi Amaechi, Kayode Fayemi, David Umahi, Mr Tinubu and Mr Osinbajo are said to be on a shortlist of governors. One of them may be announced later today as the favourite, although President Muhammadu Buhari has acquiesced to elective primary after weeks of doubling down on a consensus arrangement.

Spokespersons for Messrs Tinubu and Osinbajo campaign bodies did not return requests seeking comments. Politicians hardly own up to sharing money among delegates in public, but they also keep mum about allegations of cash inducement.

Despite its widespread manifestation, law enforcement authorities have had little success with cash-for-vote schemes during primary and general polls because they are difficult to establish. A politician may deploy hundreds of agents via proxies to give money to delegates or voters but disavow involvement in case of arrest or public humiliation.

The APC certified 2,322 delegates to vote at the primary, with 248 allotted to Ogun while Adamawa got 184. Factors including the availability of delegates often contribute to how much will be paid on a state-by-state basis. For instance, delegates in states with incumbent APC governors, like Ogun, will be more difficult to secure than in states like Adamawa, which does not have an incumbent APC governor.

But aspirants generally channel their resources towards states in which delegates are up for grabs.

Today’s affairs mirrored what transpired in late May when the opposition Peoples Democratic Party held its convention also in the nation’s capital.

The event was widely dubbed a ‘cash duel’ between Mr Abubakar, a former vice president, and Governor Nyesom Wike, his main challenger. Mr Abubakar got the ticket.