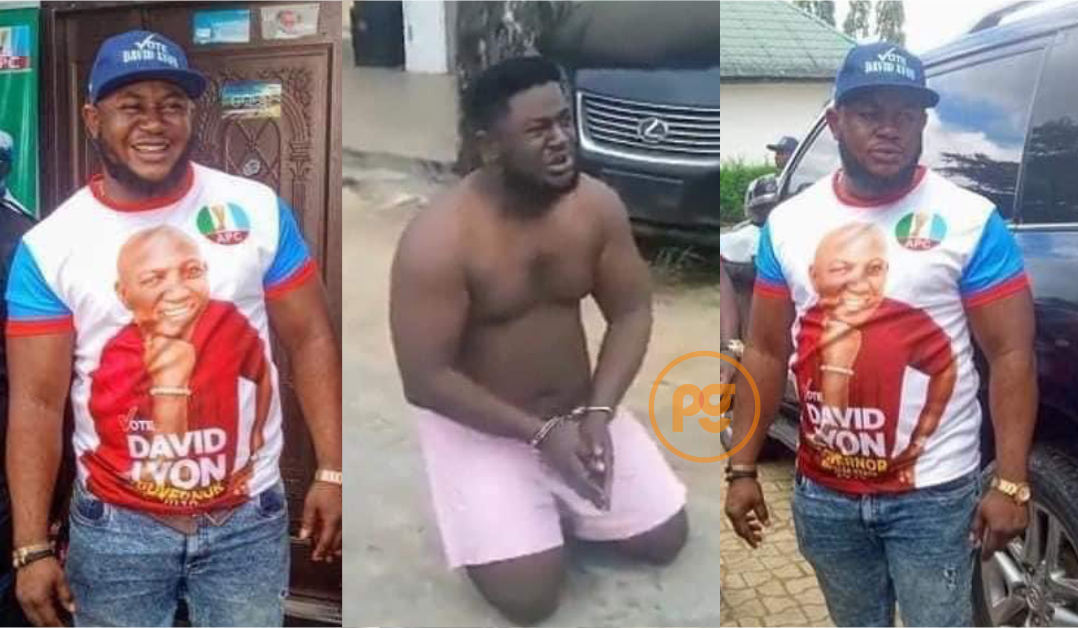 John Lyon, popularly known for flaunting loads of money on social media, has been arrested by police detectives for allegedly belonging to a kidnap syndicate operating in Bayelsa.

Mr Lyon, accused of being responsible for several high-profile abductions in the Niger Delta region, was tracked and nabbed at the weekend, in the Federal Capital Territory (FCT).

The suspect had on several occasions identified himself as a member of the ruling All Progressives Congress (APC), in Bayelsa, on his Facebook page.

He shares lastname with David Lyon, the governorship candidate of the All Progressives Congress (APC) in the 2019 Bayelsa gubernatorial election.

Although, David was declared the winner of the election by the Independent National Electoral Commission (INEC), his victory was invalidated by the Supreme Court which ruled that his running-mate, Degi Eremienyo Wangagra, submitted a fake certificate to the electoral body.

The court immediately ordered that Douye Diri of the opposition Peoples Democratic Party (PDP), who was the runner-up in the exercise be issued a certificate of return by INEC and subsequently sworn in as Bayelsa governor.

Peoples Gazette saw a video showing the alleged kidnapper, kneeling on the bare floor while being handcuffed and interrogated by persons who sounded like police detectives.

In the one minute, 29 seconds video, Mr Lyon, barely clad in a boxer, confessed to the crime though he claimed he had only participated in only two of his syndicate’s kidnap operations.

He also pleaded for mercy, claiming that his wife had just put to bed and delivered of a baby.

In the video, The Gazette noticed the voice of a man in the background claiming he was one of Mr Lyon’s victims while noting that the suspect must have kidnapped more than two persons.

The man claimed he once fell prey as Mr Lyon and his gang abducted him and threatened to “waste” him if he would refuse to pay ransom for his release.

A search conducted on Mr Lyon’s social media page (Facebook) showed that the suspect once worked for Sterling bank between 2008 and 2014.

His social media posts showed him flaunting luxurious items and displaying wads of dollars while asking his followers to “hustle for their money.”

There are pictures of him posing at different social gatherings, posing with security details.

Ms Butswat said the command would provide full details of his arrest to the public on Monday.

Editor’s Note: An earlier version of this story incorrectly described the suspect as a brother to David Lyon, the Bayelsa politician. The error was corrected with an update.