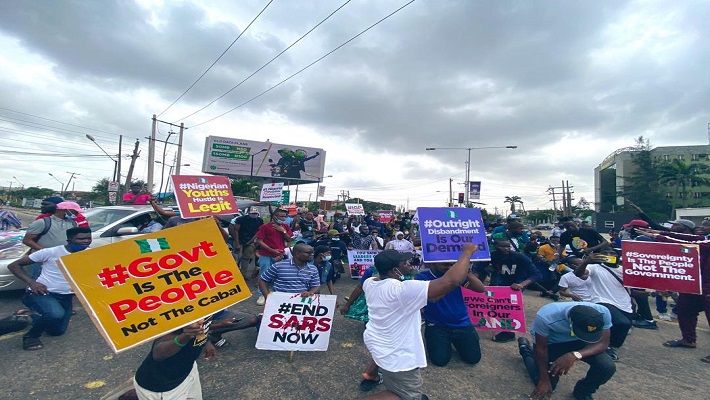 Three people, including a teenager, have been shot dead and many others critically wounded after police and soldiers opened live rounds on protesters in Ogbomoso, raising fears of yet another set of casualties.

The protesters were shot after the stormed the palace of Soun of Ogbomoso to demand an explanation from the king over his failure to condemn the police’s killing of a 20-year-old protester, Jimoh Isiaq, on Saturday.

Youth minister Sunday Dare was at the palace when the shooting occurred. The minister quickly went on social media to tag the protesters as hoodlums and miscreants in apparent bid to justify the discriminate use of lethal force by his orderlies and soldiers, witnesses told Peoples Gazette.

The Gazette saw a video which showed the police moving bodies into two people, including one teenager, into a police van.

The video was shot on Sunday afternoon, barely hours after the police announced scrapping of the brutal SARS squad.

Ogbomoso has been in the news since Saturday afternoon when an #EndSARS campaigner, Jimoh Isiaq, was shot dead by the police, who continue to deny involvement despite evidence.

A video of an apparent boy lying lifeless and covered in blood was shared with Peoples Gazette on Sunday evening.

The police and soldiers deployed the lethal force hours after Inspector-General Muhammed Adamu announced immediate abolition of the brutal police squad, whose decades of deadly and corrupt activities propelled #EndSARS into a worldwide agitation.

It was not immediately clear whether they fatal shots were fired by the police or soldiers, but witnesses told the Gazette that both security agencies were on ground in Ogbomoso.

This is a developing story…