The Southeast Asian country has no death sentence for a drug trafficker; under its law, a person guilty of trafficking more than 80 grams of illicit drugs could be jailed for life. 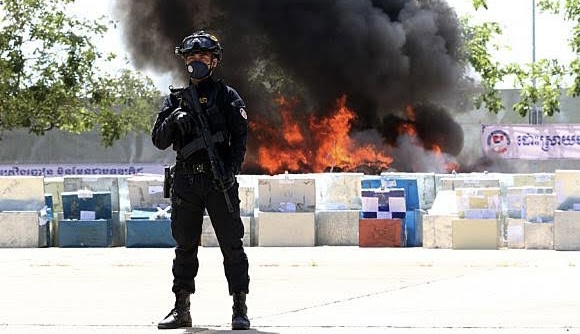 Cambodia arrested no less than 7,654 drug suspects, including 99 foreigners, between January and June 2022, the country’s anti-drug police said in a release.

In a news release on Monday, the Anti-Drug Police Department (ADP) said it confiscated 3.12 tons of illicit drugs and 185 tons of drug ingredients within the period.

According to the police, the 33-year-old foreigner was caught during a raid on his three condo rooms and one hotel room in the capital Phnom Penh’s 7 Makara district after a probe for several months.

“Some 24.3 kilograms of ketamine, 14 kilograms of crystal meth, 7.15 kilograms of ecstasy, and 144 grams of nimetazepam were seized from the suspect during the raid,” the ADP said.

The Southeast Asian country has no death sentence for a drug trafficker; under its law, a person guilty of trafficking more than 80 grams of illicit drugs could be jailed for life.