Chidi Okereke: The Headies: An analysis of all the Next Rated winners  

In its 15th edition, the award has had its fair share of drama and controversy, especially around the “Next Rated” category. 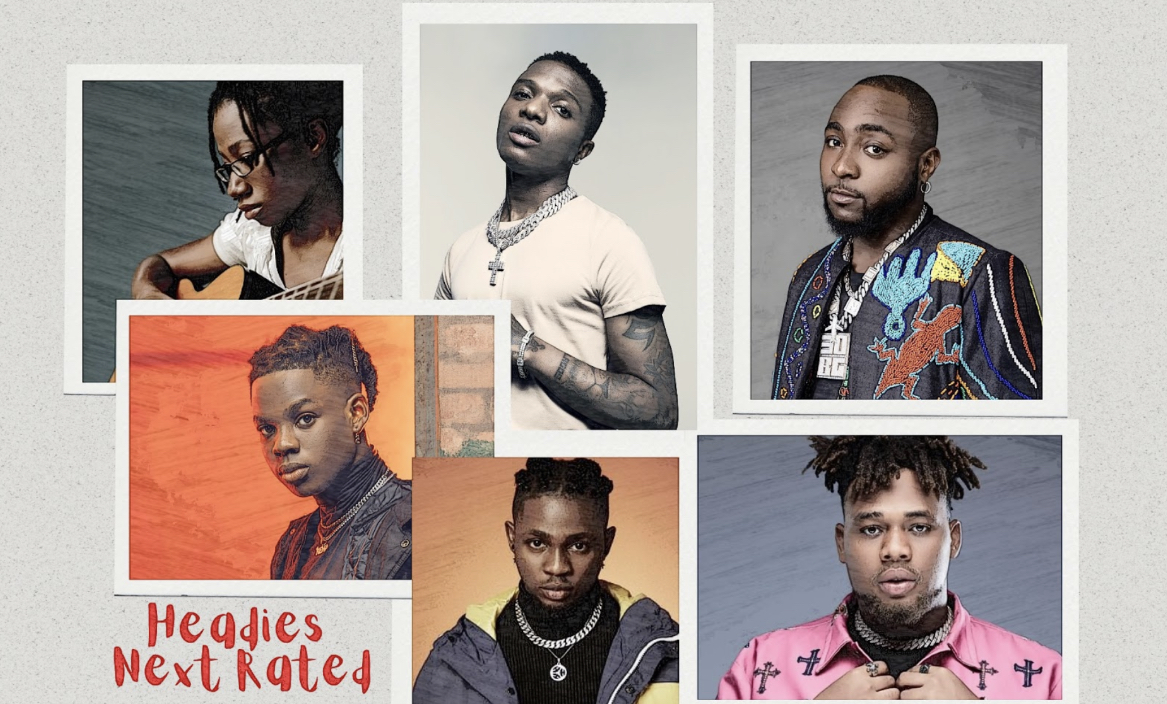 Originally called the Hip Hop World Awards, The Headies is easily the most influential and popular music award from this part of the globe. According to the founder –  Ayo Animashaun, Media Guru and owner of Hip TV – it was created to celebrate the Hip Hop and Alternative Music genres. It has since gone beyond those to celebrating Nigerian music, Afrobeats, and African music.

In its 15th edition, the award has had its fair share of drama and controversy, especially around the “Next Rated” category. This very coveted prize is won by a relatively new act who has shown the most promise in the year in review. Winners also receive a car – an SUV till it was changed to a Bentley in 2022 –  and join an influential ‘alumni’ of previous superstar winners.

Now, considering what this award has come to signify – basically a peek into the future – has the Headies always gotten it right? Did all the previous winners deserve it over other nominees? We try to answer these questions in this piece, as we analyze all the winners from the first edition in 2006 to the latest one in 2022.

Even if she wasn’t the only nominee back then, she would and should still have won the very first Next Rated award hands down. Bukola Elemide, popularly known as Asa is one of the most critically acclaimed acts from Nigeria, and has dropped 5 brilliant albums, a plethora of songs we have all come to love, and shut down Eko Hotel in her solo concert. The guys behind the Headies got it very right by making her the first ever winner of this award.

Together with Modenine, Terry The Rapman, Six Foot Plus and Ruleclean, Overdose ruled the Hip Hop space in the early 2000s. In 2006, he dropped Don’t Hate, the song that gave him his most acclaim till date. It was on the back of this song and his fierce lyricism that he won the Next Rated award in 2007.

Did the Headies miss it though? If you were around that year, you may not have questioned Overdose being named the Next Rated, even though Gino had just dropped a decent album led by No Be God. Nevertheless, the lesser-known Naeto C has gone on to be the most popular of them all so we can all agree that Headies did not get this one right.

Only one person could have won the Next Rated award over Banky W and MI, and that person is Wande Coal. This was a time when MoHits was the number one label/crew in Nigeria, and Wande Coal was its black diamond. While Banky and MI were rising stars, Wande was the brightest amongst them, and he proved the Headies right because after winning the award, he dropped Mushin to MoHits, one of Nigeria’s best albums till date. He has also won numerous awards across Nigeria and Africa, started his own label, and remains a force to reckon with. The Headies definitely got this one right.

YQ? MP? Kel? LOL. No further comments. The Headies got this one right. Djinee also did well for himself – collaborating with MI and dropping Ego, but Omawumi deserved this, and she has been the biggest act amongst them. Headies dey see road.

To be honest, many of us thought ‘The Greatest’ Jesse Jagz deserved it that year, or perhaps General Pype, with his Champion Song getting massive airplay, but Skuki had a decent run that year and deserved it. Also, considering it can be said that none of the other acts have had a better career, it was a good call.

This was a year, one of the most competitive years for The Headies Next Rated awards. I mean, Olamide is the number one rapper in Nigeria, Tiwa Savage is still the queen, and Ice Prince has racked up local and international accolades, including a BET. All of them could have easily won it, but sadly, they were up against the Machala himself, Wizkid Ayo Balogun. In 2011, Wiz – was the hottest kid on the block, and it didn’t come as a surprise that he won. He has also gone on to be Africa’s biggest act – some will say of all time – and one can conclusively say that the Headies’ have never been righter.

Even though she’s not making music anymore, Eva was Nigeria’s best female rapper at that time. Praiz – who was second runner-up at the first Edition of Project Fame West Africa – had Rich and Famous burning up the charts, while Chuddy K had everybody ‘whining’ to Slow Slow. But none of them can complain today because the person who won the 2012 Headies is Davido Adeleke. On the heels of “Back When” and “Dami Duro”, the young crooner had stolen the hearts of Nigerians and he hasn’t relented since then. He has surpassed himself every year and has established himself as one of the biggest acts in Africa. Headies saw the future well here.

LOL. We need to catch the people who decided to give this award to Sean Tizzle, line them up and tell them one or two. With all due respects, every other person on this list could have won this award before Sean Tizzle. Fine, he seemed promising then, with that Sho Lee song, but for goodness sakes, we had Burna Boy and Phyno in the mix. How did people listen to Like To Party, Abeg Abeg Abeg, and pass up on Burna? How did they watch Phyno resurrect Igbo Hip Hop and pass up on him? How did they ignore Dammy Krane blending Fuji with Hip Hop and pass up on him? How? Biggest miss by The Headies.

Patoranking just won the Recording of the Year in 2022, 8 years after winning Next Rated, so we can easily conclude that he deserved it. I mean, Runtown has had an incredible career, and basically ran the country in 2016; Yemi Alade has been phenomenal too, winning the MTV MAMA awards twice. But Patoranking has been amazing as well, and of all the nominees that year, none are as relevant/hot as him right now. Very good call.

The 2015 Headies is the most controversial and dramatic Headies Awards till date, and you can bet that the Next Rated category was the source of the drama. Eventually won by Reekado Banks, it was keenly contested by Kizz Daniel and Lil Kesh. In fact, YBNL boss – Olamide believed Lil Kesh should have won it – considering the kid had been dropping back-to-back singles, so he went on stage, grabbed the mic and expressed his displeasure. In response, Mavin boss – Don Jazzy – asked Olamide to come and collect the car. In summary, Baddoo got angry and banned him from the mainland, it got so bad that Dangote had to settle the beef.

If you ask me, Kizz Daniel should have won it. He is one of the top acts in Nigeria, and has Buga – possibly the biggest song in Nigeria/Africa this year. But do not ask me, because Reekado has also had a decent career – with and one of the biggest songs in 2021. My verdict is that the Headies tried.

2016 was the year of Mr. Eazi. Love him or hate him, you have to admit that his sound was different, and he introduced Nigerians to the Banku music a lot of us have come to love. Nevertheless, there’s a possibility that Tekno would have won if he hadn’t withdrawn himself from the category. Both have gone on to have decent careers, with Tekno featuring on Buga, what is currently the biggest song in Africa – and Eazi being one of the best digital-selling act from Naija. Great call, Headies.

2018 was definitely the year of Mayorkun, and nobody can deny it. The Mayor of Lagos as he is fondly called was the shining star of DMW, dropping hits like Eleko, Yawa, Che Che. Even though the others in the category have gone on to have decent careers, Mayor is still the number one amongst them so this is definitely a decent call by The Headies.

This is one of the most fiercely contested “Next Rated” years since Wizkid’s win in 2011. Rema was just ahead of the pack in what can be considered a tightly contested race.

Fireboy had a legit claim to the throne. The Peru crooner ticked every box to be declared the “Next Rated” and a whole lot of people thought he was going to win. He has since gone on to drop 3 incredible albums, including Bandana, one of the biggest songs this year. Other acts like Joeboy and Zlatan have gone on to drop monster hits and solid projects, but at the end of the day, one can say that The Headies got it right, as Rema has and is still doing incredible things.

Omah Lay came and took the industry by storm, releasing back-to-back hits that dominated the airplay and charts for months. He has also dropped a very decent album and continues to do amazing things. Even though some might look at the list now and wonder how International Superstar Tems didn’t bag the Next Rated, the fact is that her storm was just forming then, while Omah was already raining.

Asides Tems, the other candidates were also hot. Bella was the go-to street hop artist in 2020, while Oxlade had given us a glimpse into his vocal prowess. But at the end of the day, Tems is leading this pack, and while we can say The Headies tries, only time will help us see how right (or wrong) they were.

BNXN – formerly known as BUJU – is the new shining light in an industry that keeps producing superstars faster than Nigeria can produce capable leaders. He has one of the most outstanding debut runs the industry has ever seen, turning whatever he touches into a hit. From Lenu to Feelings to Outside to his debut project “Sorry I’m Late”, BNXN has shown why he should be considered for the top job.

The other acts have had a phenomenal debut run, giving us amazing hits after hits, but again, only time will tell if they got it right or wrong.

Chidi Okereke is a writer and digital entrepreneur. He tweets via @Chydee