In some villages, the last proper rain was three years ago, while in others, eight or even 10 years ago. 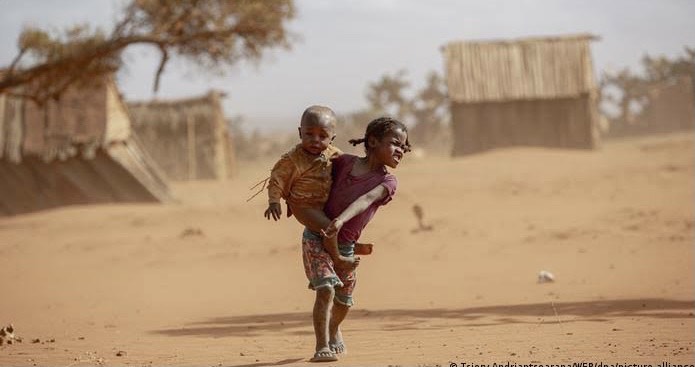 More than one million Malagasy people of the Grand Sud region require emergency food aid in what the United Nations is calling a “climate change famine.”

Tsimamorekm Aly, 44, says “In previous years there was rain, a lot of rain. I grew sweet potatoes and I had a lot of money. I even got married because I was rich.”

Some days, all Mr Aly eats is sugary water. He’s happy if there’s a handful of rice. But with six young kids and a wife to support, he often goes without.

This is the fourth year that drought has devastated Mr Aly’s home in southern Madagascar.

“Things have changed,” he added, standing on an expanse of ochre dirt where the only green to be seen is tall, spiky cacti.

Climate change is battering the Indian Ocean island and several UN agencies have warned in the past few months of a “climate change famine”.

“The situation in the south of the country is worrying,” said Alice Rahmoun, a spokesperson with the United Nations’ World Food Programme in Madagascar.

“I visited several districts and heard from families how the changing climate has driven them to hunger,” she added.

Rainfall patterns in Madagascar are growing more erratic – they’ve been below average for nearly six years, said researchers at the University of California at Santa Barbara.

“In some villages, the last proper rain was three years ago, in others, eight years ago or even 10 years ago,” said Ms Rahmoun, adding, “Fields are bare, seeds do not sprout and there is no food.”

Temperatures in southern Africa are rising at double the global rate, the Intergovernmental Panel on Climate Change says.

Cyclones, already more frequent in Madagascar than any other African country, are likely getting stronger as the earth warms, the U.S. government says.

Conflict has been a central cause of famine and hunger in countries such as Ethiopia, South Sudan, Somalia, and Yemen when the fighting stopped people from moving to find food; but Madagascar is at peace.

“Madagascar is a victim of climate change.”

Half a million children are expected to be acutely malnourished in southern Madagascar, 110,000 severely so, the UN Children’s Fund says, causing developmental delays, disease, and death.

It aims to annually produce 600 tonnes of therapeutic fortified food made of peanuts, sugar, and milk for malnourished children.

The Malagasy government is also giving parcels of land to some families fleeing the worst-hit areas.

Two hundred families received land with chickens and goats, which are more drought-resilient than cows.

They were also encouraged to plant cassava, which is more drought-resilient than maize.