The Buhari regime spokesperson said CNN’s report on the findings of the panel “fell below the main standards of journalism.” 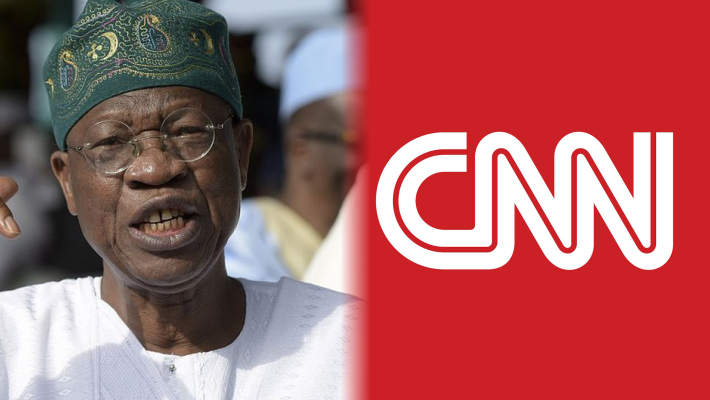 The federal government has berated CNN for celebrating the report of the Lagos Judicial Panel of Inquiry into the October 20, 2020, #EndSARS massacre at the Lekki Toll Gate.

At a media briefing in Abuja on Tuesday, the Minister of Information and Culture, Lai Mohammed, said CNN was in a rush to be vindicated.

The minister, who disclosed the federal government position on the report said “It is fake, riddled with so many errors and cannot be relied upon because its authenticity is in doubt.

“CNN apparently didn’t even read the report before rolling out the drums in celebration.

“By that action, CNN has celebrated prematurely and has now committed a double faux pas. First, by relying on unverified social media stories and videos to carry out an investigation of the October 20, 2020 incident at Lekki, where it did not have a correspondent on ground.

“CNN goofed in its report on the findings of the panel, which fell below the main standards of journalism.

“Secondly, CNN rushed to the air to celebrate an unsigned and unverified report that is riddled with inconsistencies, errors, discrepancies and innuendoes.

“That’s double faux pas by a news organisation that is eager and willing to compromise standards just to claim vindication,” Mr Mohammed said.

The minister also berated some sections of the Nigerian media which he said had also joined the lynch mob.

“Honestly, in an attempt to vilify government at all costs, they have done themselves a great disservice.

“How can any news organisation worth its salt write an editorial validating this kind of report? Are they not seeing what others, including journalists and lawyers are seeing?

“In a shocking twist, a Nigerian newspaper chose to hail what it calls “detailed investigative report” by CNN, even when the news channel did not even cover the incident of October 20 2020.

“It’s a classic case of cutting your nose to spite your face,” he said.

Mr Mohammed said nothing in the report being circulated would make the government change its stand, insisting there was no massacre at Lekki on October 20, 2020.