Stakeholders in the South-South condemned the violent conduct of some Police,FRSC personnel and VIOs in enforcing traffic rules and regulations. 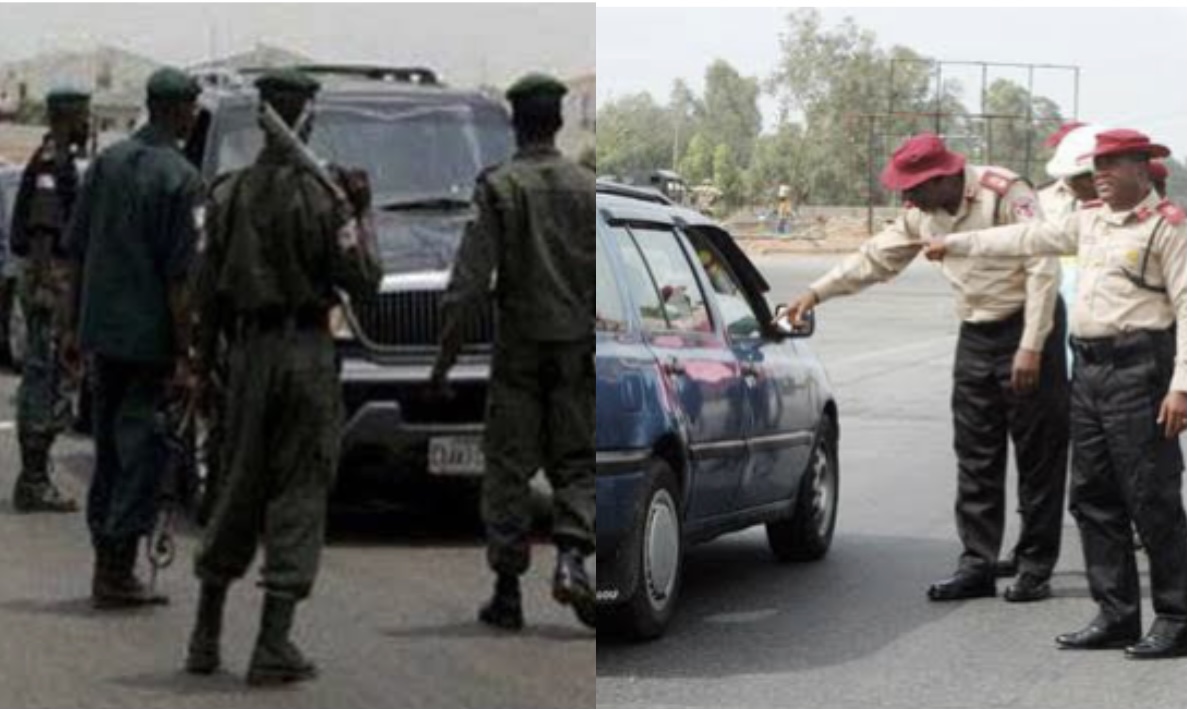 The respondents who expressed their displeasure during a survey carried out by the News Agency of Nigeria (NAN) in the region, said such bullying officials extorted money from road users.

They said that the officials had deployed dubious means to exploit motorists in the zone and called for the withdrawal of such officers from the roads as well as discontinuation of the practice.

The respondents said the violent acts had at times resulted in road crashes some of which were fatal.

One of them, Emeka Obi, a businessman, told NAN in Calabar that some policemen, VIOs and FRSC officials were in the habit of stopping vehicles and carrying out unnecessary checks on them.

He lamented that while on duty, such officials would stop some motorists to check their car wipers, trafficators, licences, seat belt usage, with the sole intention of exploiting them.

“Some of these checks are not intended as a warning to make you fix the deficiencies in your car; they are meant to extort money from you.

“Last week, after a VIO had finished checking my car, he found out that my particulars were all complete and the next thing he asked for was that I provide my first aid box.

“He ended up arguing with me that I was supposed to have a first aid box and a trash can inside my car. All these were just to extort money from me and I ended up giving him N2,000,” he said.

Another respondent, Esther Oti, said that the police were now doing the job of FRSC by checking for the expiry date of driver’s licences and car particulars.

Mrs Oti wondered why a police officer would be asking her for a fire extinguisher and spare tyre.

“When you see them asking you for all these, just know that they want to obtain money from you. It is sad that the police in Calabar have taken over the job of FRSC and VIOs.

“These people on our roads are only using their uniforms to take bribes for themselves and their superiors,” she said.

She called on the government to take a critical look at the unlawful activities of the VIOs and others with a view to curtailing them.

Mrs Oti further called on the authorities of FRSC and the police to always train their personnel to refrain from harassing motorists with the intention of extorting money from them.

A truck driver in Eleme, Rivers, Emmanuel Mba, said officers of the FRSC operating on the East-West road went as far as putting barricades on the road to stop motorists.

Mr Mba said that the act had led to many avoidable road crashes involving trucks laden with petroleum products which tried to avoid such barricades and skidded off the road.

“The truth is that the poor state of roads and the manner in which some of these officials flag down moving trucks lead to accidents which are fatal sometimes,” he said.

Also, another respondent, Sam Igonima, lamented the constant harassment meted out to motorists in Rivers by some traffic regulatory officers on the road.

Ms Igomina alleged that some of the officers demanded gratifications from traffic offenders rather than punish them, while subjecting other road users to delays for no just cause.

She also alleged verbal abuse by such officers while enforcing traffic rules and regulations.

Residents in Benin, the Edo capital, also expressed displeasure with the uncivilised manner some road traffic enforcement personnel dealt with motorists in the state.

A civil servant, Mr Henry Onovweghware, said the use of force by most policemen, FRSC officials, VIOs and Edo State Traffic Management Agency (EDSTMA) officials in enforcing traffic rules was wrong and should be discontinued.

Mr Onovweghware said: “In this age, traffic personnel of the police FRSC, EDSTMA and VIOs should use technology in apprehending traffic rule violators.

“When I say technology, it does not have to be as sophisticated as automatic traffic cameras mounted on traffic lights.

“A simple android phone can be used to film an offence and the details circulated to other checkpoints.

“Such will be presented as evidence in a mobile court for appropriate sanctions.

“So, the use of force should be discontinued to prevent harm to road users at the scene when such violent enforcement is being carried out,” he said.

Another Benin resident, Dr Bright Oniovokukor, said violent enforcement of traffic rules and regulations was a violation of human rights.

“It’s rather unfortunate that these VIO, FRSC, police, and EDSTMA officers do not put the training they have received into action.

“The embarrassment of citizens is uncalled for and most annoying is that they want to grab money from the pockets of those they harass,” he said.

He called for the setting up of a functional supervision and reporting mechanism to enable victims to report erring officers.

Similarly, a journalist, Michael Egbejule, called for the removal of officers with violent behaviour from road traffic enforcement duties.

Mr Egbejule said traffic enforcement officers should be civilised particularly as their duty was to protect motorists and ensure safety of lives on the road.

“FRSC, VIO officials have become terror on the road in bid to ensure enforcement of traffic rules and regulations.

“These men should be removed from the roads as they pose a serious threat to the safety of motorists,” he said.

On his part, a commercial driver, Mathew Osagie, called for more training for road traffic rule enforcement officers to enable them to do their jobs in a more friendly manner.

“I have witnessed cases where some road traffic enforcement officers behave mannerless to the extent of even fighting road users,” he said.

In Asaba, Okechukwu Onumonu, said that some traffic law enforcers should be more civil instead of bullying motorists and extorting money from them.

He alleged that in some cases at the Niger Bridge head, law enforcers colluded with street urchins to collect money from motorists whose vehicles were overloaded.

Narrating his ordeal to NAN, he said that while driving his car with all the documents intact and current, FRSC officials stopped him, searched his vehicle and told him that his fire extinguisher can was empty.

“One of the officers noticed it and wanted to book me, but I was later asked to give them some money which I did and they let me go,” he said.

A civil servant in Yenagoa, Samson Agu, said the way some traffic regulators behaved in Bayelsa, was most undesirable.

He said most times they exploited motorist and tricycle riders, adding that while in their wild behaviour they caused road crashes.

Mr Agu called on the government to sanitise the system and punish such scrupulous officials.