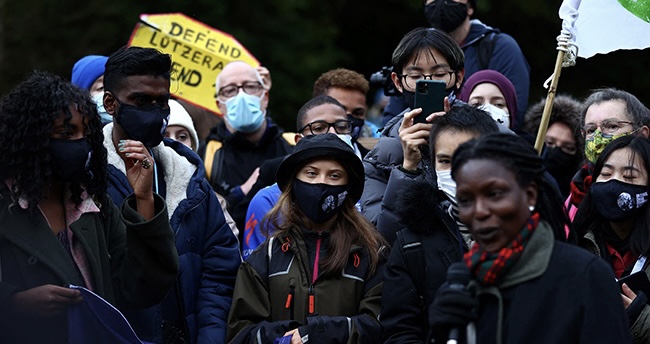 Some young environment activists from around the world are angry with their country delegates over exclusion from the ongoing negotiations at COP26, aimed at tackling climate change issues.

They say the negotiation of world leaders without youth being part of the discussion, is a “joke”.

While about 197 delegates from countries across the world were in a closed-door meeting, negotiating issues including the reduction of the burning of fossil fuel and keeping the temperature at a level of 1.5 degrees, young people took to the street in Glasgow, protesting the failure of world leaders, while others expressed their grievances at COP 26 Action Room 2.

Some of the young people from Nigeria, Sudan, Argentina, Fidel, United States among others, told Peoples Gazette that negotiation without the youth is a joke that needs to be revisited.

The youth who accused leaders of decades of neglect counted some issues affecting their countries that need urgent decisions and action without much talk.

Ernest Gibbson, a youth advocate from Fidel, a pacific region, narrated that tropical cyclones had killed several children and rendered hundreds of women homeless, including the destruction of farms, but in mid-October, the cyclones were double of its ever occurrences.

“This is why this conversation is important to open the space to have some positive changes,” she said angrily, noting that world leaders consciously negotiate without hearing from the youth and the indigenous people.

“Our survival and the future of humanity are at stake yet they are still treating us like a jovial thing while in the natural fact we need to be acting faster, more ambitiously and with far more integrity than ever before,” she added.

“And, if they include young people, it is only the young people they like and want to hear from, and this means they are shutting people.”

Another youth activist, Kevin Patel from Louise Angelos California in the U.S. told The Gazette that several young people paid heavily to be in COP26 for their voices to be heard but leaders have shut the doors against them and are discussing in secret.

He expressed disappointment that despite his community struggling to survive from air pollution, drought, “and yet young people are not allowed to tell their stories at the negotiations”.

“Every person wants to be heard and also implement the solution they have but a lot of these rooms are closed and young people are not in the discussion room despite making plans”, he said.

The complaint is no different from the Sudan young activist, Mathani Mudatir.

Ms Mudatir stated that the political issues in Sudan had restricted a lot of youth who had the intention of coming to the COP and a lot of voices will be missed.

Ms Mudatir urged leaders to recognise young people as they are mostly affected, appealing for finance and support for young people’s voices to be heard in decision making.

Argentina’s youth activist, Eyal Weintraub, had believed the COP26 would have been an avenue for youth to channel their grievances but the reverse is the case.

He said; “I am definitely not happy because we are mad and angry, and we believe this COP would have been most inclusive and not only because of the ridiculous prices to get houses but the expensive visa,” Mr Weintraub said.

He lamented that despite going through the rigorous process to get a visa and accreditation in an era where there is devaluation in the northern American economy, UN organisations are snubbing young people in decision-making.

“We are having the worst drought in history, and last year, a million hectares were burnt to a fire which caused hundreds of deaths, and in the middle of October, we have rocketed seriously due to the increase of global warming.

“We need urgent discussion now, and to make this discussion we need radical action to galvanise the unrest and the mobilisation that is happening outside in public places,” the young activist said.

Nigerian environmental and climate activist, Nnimmo Bassey, justified the youth grievances, pointing to the way the COP26 is planned and hosted.

Mr Bassey said; “The youths are absolutely right to be enraged by the way COP26 is planned and hosted.

“Leaders have notched a new level of insensitivity and refusal to listen to the voices of young people to whom the future belongs”. “They have many legitimate reasons to be angry,” he added.

Mr Bassey said examples are plans by countries to stop carbon emissions ranging from the year 2050 to 2070, which he described as a trick to shift the problem faced by those affected by carbon emissions.

“There are other vague and recycled promises by some nations claiming they will end deforestation by 2030.

“Besides the vacuous talks, thousands of young people have been kept away from attending the COP either through vaccine apartheid or be direct barriers erected at the venues of COP26 to block entry into the premises or even into meeting rooms.

“The entire scenario is incredibly fascist,” he told The Gazette on late Sunday in Glasgow.

On Friday, thousands of youth activists marched through Glasgow protesting against investment in fossil fuels and failure to tackle the climate crisis.

The young activists held banners and placards with different inscriptions used to express their displeasure of the COP26.

This story was produced as part of the 2021 Climate Change Media Partnership, a journalism fellowship organized by Internews’ Earth Journalism Network and the Stanley Center for Peace and Security.