Justice Fatun Riman described the exercise as undemocratic and unlawful. 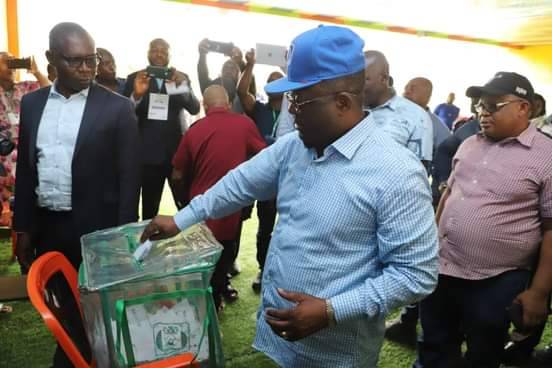 The exercise, which was swept by the All Progressive Party (APC), was conducted by the Ebonyi State Independent Electoral Commission (EBSIEC).

However, some members of the Inter-Party Advisory Council (IPAC) boycotted the polls due to the N1 million and N200,000 nomination fees for the chairmanship and councillorship seats, respectively.

The group, thereafter, approached the court in a suit No. FHC/AI/CS/151/2022 to nullify the outcome of the polls.

In a judgment, Justice Fatun Riman, declared the elections “null and void.”

Mr Riman described the exercise as undemocratic and unlawful.

Speaking with journalists after the judgment, the Counsel for the petitioner, Mudi Erhenedi, hailed the court for its “sound judgment”.

Mr Erhenedi said that it was unlawful to conduct the LGA elections “without availing the petitioner with the exact laws meant to regulate the exercise.”

He said: “There are a lot of other issues that are not in compliance with the Electoral Act 2022 as Amended.

“The Act says, ‘the procedures for conducting elections into the local government areas by state electoral commissions must comply with that procedure for the election’.

“My position now is that my clients demanded to be availed with this law.

“We wrote to EBSIEC, the House of Assembly and INEC but they refused to provide us with the extant law.

“The law can guide any of the contestants to know when going within or against it during such an election,” Mr Erhenedi said.

The defence counsel, Roy Nweze, could not be reached for his reaction to the judgement.

Meanwhile, in a reaction to the judgment, Governor David Umahi urged the law-abiding residents of the state to remain calm and go about their businesses peacefully.

The reaction is contained in a statement issued by his Special Assistant on Media and Strategy, Chooks Oko, and made available to reporters in Abakaliki.

“Our lawyers will study the judgement to determine the best way forward.

“My belief in the judiciary as the bastion of justice and equity remains unshaken,” the statement added.