The suspect had killed his colleague a day before a court was set to sentence him on charges of stalking her. 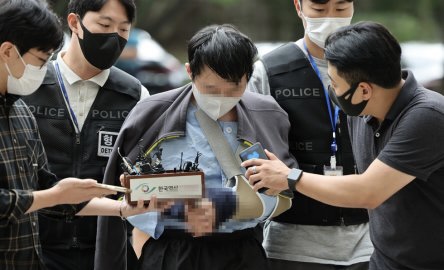 A local court on Friday issued a warrant of arrest of the suspect in the shocking murder of a female subway worker inside a subway ladies’ restroom in Seoul.

The 31-year-old Seoul Metro employee, surnamed Jeon, was apprehended on Wednesday evening at Sindang Station on Line No. 2 after allegedly stabbing his female colleague in her 20s to death in the subway station ladies’ room.

The case shocked the nation as it was revealed the killing took place one day before a court was set to sentence him on charges of stalking her. The two had known each other since entering Seoul Metro the same year.

The Seoul Central District Court issued the arrest warrant for the suspect, citing the risk of him fleeing or destroying evidence.

Earlier in the day, Jeon attended an arraignment hearing aimed at determining whether to issue a formal arrest warrant for him.

Jeon, wearing shorts and slippers with a sling over his left arm, was brought in a police car to the court at 2:06 p.m.

His hair dishevelled and head downcast, Jeon got out of the police car and quickly moved towards the court building without a word.

Appearing before reporters again following the hearing that lasted for about half an hour, Jeon said, “I am very sorry” after a reporter asked if he had anything to say to the victim. Repeating “I am sorry” without answering other questions, including why he killed the victim.

Police are separately reviewing whether to disclose his identity to the public, a decision made for horrendous crimes.