Army’s denial follows a similar pattern that was recorded in the wake of their deadly operation at the Lekki Tollgate on October 20, 2020. 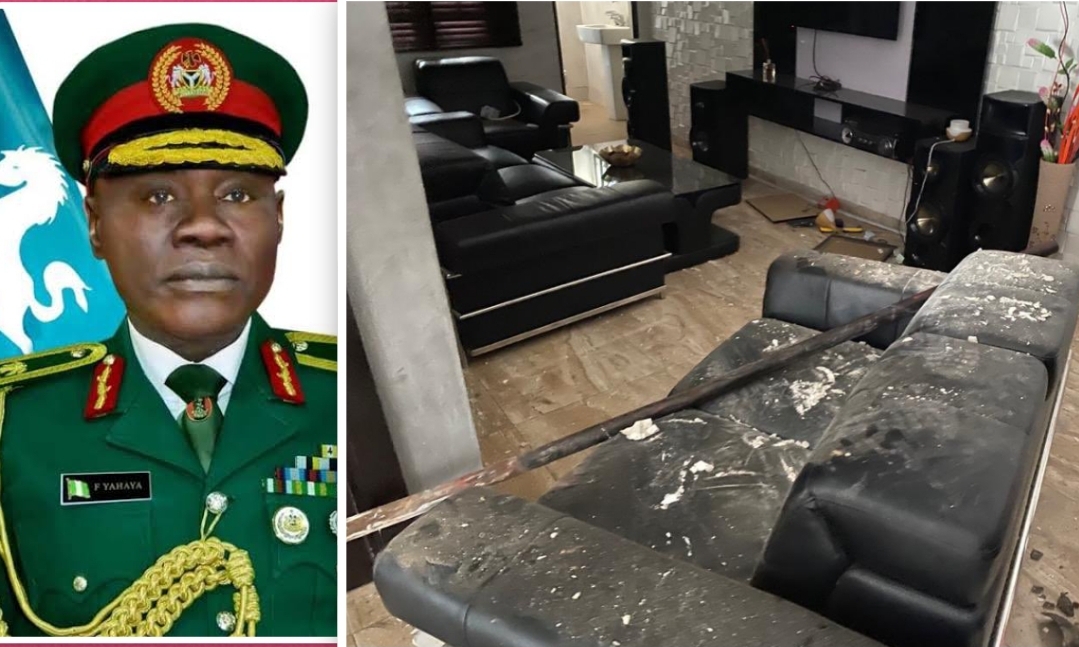 The Nigerian Army has denied that its officials attacked the Ibadan residence of Yoruba secessionist agitator Sunday Igboho in Ibadan, killed persons, and took their bodies away.

The men, dressed in military uniform attacked the house located in the Soka area of Ibadan at about 1:30 a.m. on Thursday, destroying valuable assets in the building, Peoples Gazette learnt.

Footage from the incident, shared by loyalists of the agitator, also contained blood spills in the activist’s living room and vehicles destroyed.

A commentator in a live video of the incident said the soldiers stormed the residence with five patrol vans, Hilux, and private vehicles and passed through Iwo road from Soka after the attack.

According to her, soldiers departed the residence at about 04:30 a.m.

Banji Akintoye, the leader of the umbrella body of Yoruba self-determination groups, Ilana Omo Oodua who confirmed the attack, said that seven persons were allegedly killed and taken away.

Mr Igboho’s wife alongside scores were also taken away by the soldiers who did not present a warrant when they invaded the residential property.

“I want to say to the whole world that the attack was carried out by the elements of the Nigerian Army who were accompanied by international terrorists hired by the Nigerian state,” Mr Akintoye said.

“The Assailants spoke the French language fluently. Seven people were killed by the attackers, with their corpses taken away. Scores of people, including the wife of chief Ighoho, were also taken away by the gunmen,” he noted.

Meanwhile, Oluyomi Koiki, a spokesperson for Mr Igboho in an update on Facebook stated that “two people killed, 10 taken away now about to be taken to Abuja.”

But the spokesperson for the Nigerian Army, Onyema Nwachukwu told The Gazette that he was unaware of the incident.

“There’s nothing like that, I don’t have that information. Soldiers did not carry out an attack on Igboho,” Mr Nwachukwu said over the telephone.

Army’s denial follows a similar pattern that was recorded in the wake of their deadly operation at the Lekki Tollgate on October 20, 2020.

Despite shreds of evidence provided, the Nigerian Army also initially denied their presence at the tollgate where its operatives opened fire on #EndSars protesters who called for an end to police brutality and extrajudicial killings.

Many sources, including those from security sources, confirmed to The Gazette that casualties were recorded on the night of the attack after soldiers fired at protesters who sat on the ground, singing the national anthem and waving the Nigerian flag.

After the army initially claimed that videos and photos from the scene were “doctored” to incriminate the military, it later admitted before a panel of enquiry investigating the matter that its men were present on the night but only fired shots in the air to disperse the demonstrators and to enforce curfew.