The club thief walked onto the tee on the 10th hole. 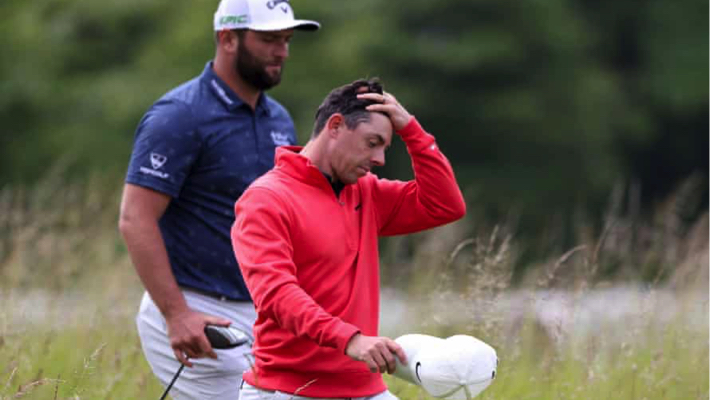 Jon Rahm and Rory McIlroy on Friday found themselves at the centre of a bizarre incident at the Renaissance Club in North Berwick.

Rahm claimed a share of the lead at the Scottish Open, while McIlroy missed the cut.

The two European Ryder Cup stars were playing with Justin Thomas when, on the 10th hole, a spectator walked onto the tee.

He removed the cover from the McIlroy’s driver before taking a couple of practice swings with an iron.

Everyone saw what happened on TV,” McIlroy said.

“It was handled efficiently and everything was okay. I had no idea who it was.”

Rahm claimed the man, who Police Scotland said was taken to hospital after being ejected from the course, smelt of alcohol and added, “I don’t think any of us understood what was going on.

“It didn’t put anyone off.

If anything it put a smile on our faces.

It will be a pretty good story to tell in the future.”

Rahm’s sparkling recent form, which secured the US Open title last month and sees him riding high, is also shaping up into a pretty good story to tell.

The Spaniard world number one carded eight birdies in a 65 to follow his Thursday 66 for 11 under overall.

Belgium’s Thomas Detry matched Rahm’s scores and England’s first-round leader Jack Senior made it a three-way tie at the top.

Lee Westwood stormed into the clubhouse, going eagle, birdie, birdie over the final three holes and is a shot behind the leaders, alongside Matt Fitzpatrick and George Coetzee.

Thomas and Ian Poulter are in a group of four players on eight under.

Inebriated interlopers were not the end of McIlroy’s concerns as he could only card a level par 71 on Friday.