“One of the properties in question located at No 42, Gana Street, Maitama, was illegally acquired by a renowned lawyer.” 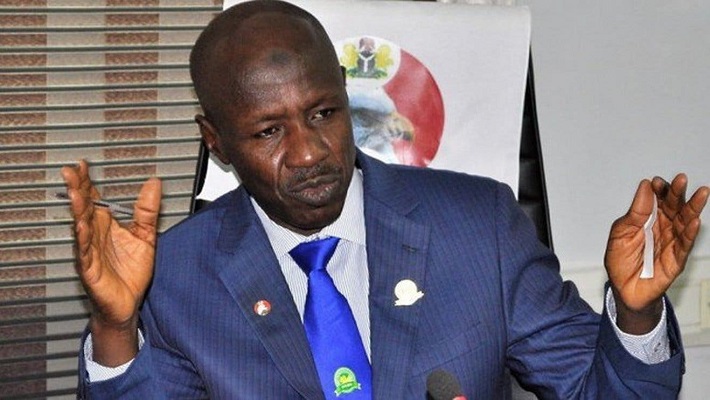 The Economic and Financial Crimes Commission has been accused of mismanaging 222 assets valued at N1.63 trillion under the former acting chairman, Ibrahim Magu.

According to Vanguard, a witness, Ngozika Ihuoma, told the Federal High Court in Abuja on Thursday that the money was recovered by the defunct Pension Reform Taskforce Team (PRTT).

Mr. Ihuoma had appeared as the first defence witness in the ongoing trial of the former PRTT chairman, Abdulrasheed Maina.

The witness, who told the court that he was a management consultant, said Mr. Magu before Justice Ayo Salami of the Judicial Commission of Inquiry admitted distributing the properties based on presidential directives.

He told the court that his firm, Crincad & Cari Nigeria Limited, was contracted by the PRTT for consultancy service.

Insisting that the anti-graft agency made account of recovered assets, Mr. Ihuoma said one of the properties located in Maitama, Abuja and valued at N6 billion in 2011 was sold for N1 billion to a renowned lawyer in 2015.

“One of the properties in question located at No 42, Gana Street, Maitama, was illegally acquired by a renowned lawyer while the property was still subject to litigation,” the witness added, insisting that EFCC should be made to account for all the recovered assets.

Led in evidence-in-chief by Mr. Maina’s lawyer, Adeola Olawale, the witness told the court that the PRTT was in 2015, willing to provide President Muhammadu Buhari with the intelligence to recover over N3 trillion hidden in undisclosed accounts in some banks.

Mr. Ihuoma said Mr. Buhari sent the Attorney-General of the Federation and Minister of Justice, Abubakar Malami, and the National Security Adviser to meet Mr. Maina in Dubai.

“After the meeting in Dubai, Maina gave the delegation intelligence report that led to the recovery of N1.3 trillion out of the N3 trillion promised to recover,” he said.

The witness added, “The money was reported to the Senate committee that investigated Maina’s reinstatement back to the civil service in 2017.

“The task team petitioned the Senate on the need to revisit the 7th Assembly Joint Committee that its report was quashed by the Federal High Court in view of the fact that the 222 choice property valued at N1.63 trillion that was handed over to the EFCC has started to be mismanaged.”

According to the witness, Mr. Magu denied being a member of the PRTT and that it handed over the recovered properties to the EFCC when he appeared before a House of Representatives committee that investigated the reinstatement of Mr. Maina to his office.

Angered by Mr. Magu’s claim, the witness said he petitioned the AGF, through his company, that the former EFCC boss lied on oath before the committee that the agency was not part of the PRTT.

That led Mr. Malami to send a petition to Mr. Buhari, “demanding that EFCC should account for the 222 property valued at 1.63 trillion.”

The witness noted that Mr. Malami’s petition eventually led to the Justice Salami-led panel of inquiry.