El-Rufai may be too short, but he can still see the sky: Tinubu

The former Lagos governor said his Kaduna ally had been “making the progress” around social and economic issues in his state. 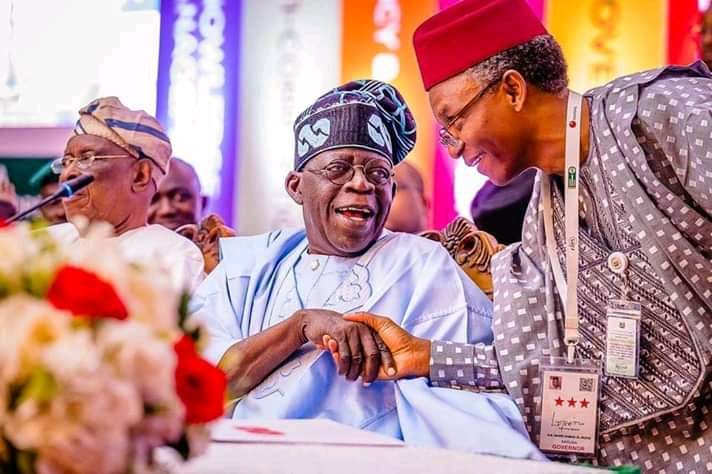 Ruling APC presidential frontrunner Bola Tinubu has hailed his political ally El-Rufai as a short but shrewd politician, saying he was particularly happy that the Kaduna governor is not limited by his physical attributes.

“I always tell him,” Mr Tinubu said while pointing at Mr El-Rufai during a function in Kaduna earlier today. “No matter how short a man is, he will still see the sky.” Mr El-Rufai is widely deemed one of the country’s shortest politicians of note, but his actual height has not been officially disclosed.

Mr Tinubu’s comments came when he headlined a meeting of delegates organised by Mr El-Rufai in the northern commercial hub.

The former Lagos governor said his Kaduna ally had been “making the progress” around social and economic issues in his state.

“He is bringing companies. Making it easy — ease of doing business. For corporations like Olam to come to Kaduna to invest. To create job opportunities and train our people. That is what Nigeria needs,” Mr Tinubu said to rousing applause.

Mr Tinubu has been canvassing delegates across the country ahead of the ruling party’s presidential primaries later this month. He is considered a frontrunner, although other bigwigs like Vice President Yemi Osinbajo and former President Goodluck Jonathan are also in the race.

Mr El-Rufai had already pledged his support for Mr Tinubu and also assured him of Kaduna’s large number of delegates.