Lagosians who took to the street to demand dissolution of the brutal SARS unit were met with police intimidation and deadly force. 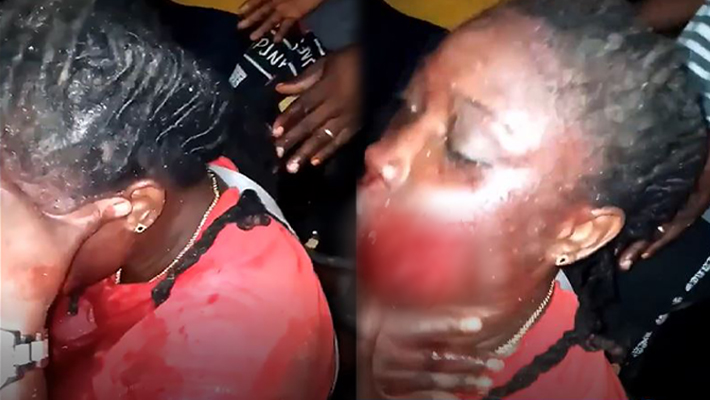 A Nigerian woman who was shot in the mouth by a police officer in Lagos has been hospitalised in critical condition, her sister told Peoples Gazette.

Joy Ndubueze was lured to a canal in Opebi by Joseph Eze, a police corporal in the Lagos State Police Command, before she was shot in the mouth in an apparent attempt on her life, the Gazette learnt.

Mr. Eze thought he had killed Ms. Ndubueze and fled the scene, a witness and her sister, Peculiar Ndubueze, told the Gazette.

But she did not die, and people in the neighbourhood helped stabilise her before quickly moving her to the hospital.

Doctors at Ikeja General Hospital have been attending to her, with five pints (2.8 litres) of blood already demanded overnight, Peculiar Ndubueze said.

Peculiar said Joy was friends with and dated Mr. Eze for some time, but the pair broke up last week and the police officer sought reconciliation yesterday.

“He invited her to drink and then lured her out of the place to a canal where he shot her in the mouth and bullets pierced both sides,” she said. “He immediately ran away and has not been found since then.”

“His intention was to kill her but she was lucky she did not die,” she told the Gazette, saying her sister has been fighting to stay alive at the hospital.

A video of the attack (graphic content) was circulated on social media.

Peculiar said the police have already been to Mr. Eze’s residence but could not find him. She, however, asked Nigerians to help seek justice in the matter.

“It is only the two of us that our parents gave birth to, and our mother has been very ill in the village with high blood pressure,” she said.

A spokesperson to the police in Lagos did not return a request seeking comments about the deadly action of one of their own.

The attack coincided with a string of protests that held across downtown throughout yesterday and overnight, as citizens demanded an end to police brutality across the country under the ongoing #EndSARS campaign.

Many of the protesters were met with police intimidation and deadly force coordinated by the police commissioner Hakeem Odumosu.

The military was later called in to broker peace between the protesters and the police, shortly after the command’s spokesman Muyiwa Adejobi threatened protesters with violence if they failed to properly conduct themselves.