The relationship was kept entirely from the public, going under public radar even as Mr. Abubakar sought the presidency against Muhammadu Buhari in 2019. 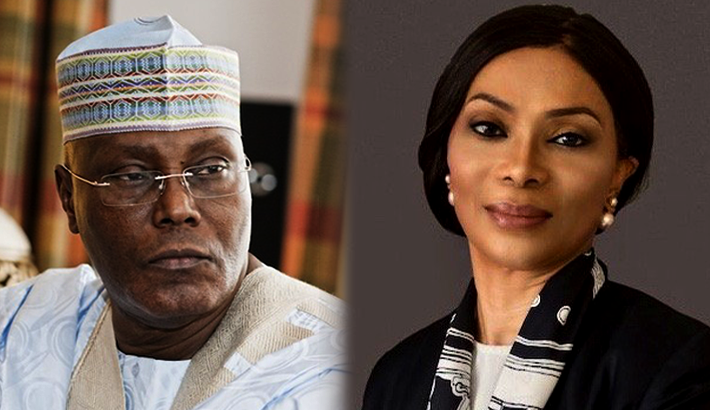 Atiku Abubakar’s hankering for a large and boisterous household had been taken in good faith by his wives of many years. But his seemingly audacious entanglement with a new wife of Morrocan origin appears to have dropped a match in the powder barrel for his hitherto favourite spouse.

Jennifer Douglas-Abubakar, third wife of the former vice-president, has excused herself from her matrimonial home, seething about her husband’s decision to take a fourth wife, Peoples Gazette can report based on information from family sources. She has yet to file for divorce and it was yet unclear whether or not she planned to do so.

Although Mrs. Douglas-Abubakar only recently relocated to London from their family homes in Abuja and Dubai, she has mulled her husband’s action and its consequences since Mr. Abubakar first introduced his new wife to the family in 2017, sources said. He married the Morrocan that year and in 2018 they welcomed their first son together.

The relationship has been kept entirely from the public, going under public radar even as Mr. Abubakar sought presidency as the major contender against President Muhammadu Buhari in 2019.

“He saw the relationship as a personal matter,” a family source told the Gazette over the weekend. “But it is understandable why the public would be interested in what is going on even in the most intimate corners of his household.”

Mr. Abubakar, 74, has for decades been vocal about his quest to manage the affairs of Nigeria’s governance systems. He first sought presidency in early and mid-1990s before being tapped as vice-president by Olusegun Obasanjo in 1999, leaving office in 2007 after two terms.

Since then, Mr. Abubakar, a retired customs chief with vast imprints on Nigeria’s logistics and manufacturing sectors, has run in every presidential election either as a primary contender or main party flagbearer.

His political exploits and structures have deepened considerably since 2015, without any fracture amongst his three wives and twenty-eight children. Until now.

“Many people have become too used to his suave appearance that they often forget that he is a devout Muslim,” a family source said under anonymity to comment on Mr. Abubakar’s personal concerns. “His faith allows him to take four wives or even more and we all know he has the financial and intellectual ability to elevate all his wives and children.”

The Gazette understands that Mr. Abubakar’s other wives have been more accepting of the Moroccan new wife than Mrs. Douglas-Abubakar, whom sources said was considered to be the worst hit by the development.

“She saw it as a let down because of the special level of care she had been receiving from the former vice-president,” a family source said. “She just felt the Moroccan woman had arrived to take her place.”

Our sources said Mrs. Douglas-Abubakar was expected to get over the matter since the Moroccan wife has been at home for three years and their new son has already clocked two.

A seasoned attorney of Igbo extraction, Mrs. Jennifer Abubakar has long been renowned for her critical roles in her husband’s political and vast business interests.

It was widely believed that her devotion to her husband’s success informed her alleged involvement in suspicious movement of funds on his behalf, which culminated in her indictment by the U.S. Senate’s Committee on Homeland Security and Government Affairs a decade ago.

The Anambra-born lawyer has since denied the scandalous allegations, dismissing them as a fruitless expedition of her husband’s political detractors.

She declined multiple requests from the Gazette for comments on her decision to move out of her matrimonial home against the backdrop of her husband’s new marriage.

A spokesman for Mr. Abubakar also declined comments about the brewing rancor in the household of the former vice-president, who is expected to run again for presidency in 2023.

Earlier this month, ThisDay reported that the presidential candidate of the opposition PDP in the 2019 general election had recently sold his stake at logistics giant INTELS for $100 million, in an apparent move to buffer his war chest in time for party convention and primaries.

If handled well, the fallout from Mr. Abubakar’s marriage to a fourth wife may not necessarily constitute a stumbling block for his political fortunes in 2023, said political analyst Shola Olubanjo.

“For those of us who know Atiku Abubakar’s journey with Jennifer Douglas, it is difficult to say that the former vice-president should not take her reservations, whatever their nature, seriously,” Mr. Olubanjo said. “Now that 2023 is gradually taking the front burner, he has to move fast.’

Nonetheless, Mr. Olubanjo expressed confidence in Mr. Abubakar’s ability to resolve the issues before campaign season to avoid being bogged down by personal challenges.

“He’s a shrewd politician and businessman,” the analyst said. “We shouldn’t expect anything less from him with respect to his household.”