Hadiza Bala Usman did not play an open role in the 2015 campaign, but her share of the election spoils has been rapid and significant. 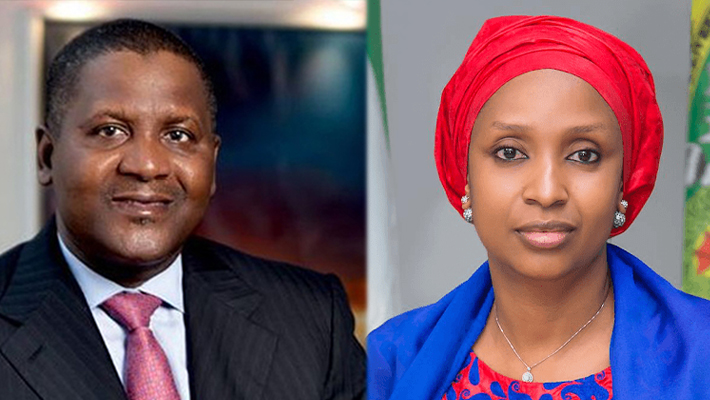 In the heat of the 2015 general elections, Aliko Dangote transferred N200 million to a bank account run by Hadiza Bala Usman, a BringBackOurGirls activist who has been the managing director of Nigerian Ports Authority since 2016.

Ms. Bala Usman received the first N100 million transfer on February 6, 2015; while the second N100 million came through three days later on February 9. The transfers carried ambiguous descriptions that made it difficult to conclude their purpose.

Since November 3, neither Mr. Dangote nor Ms. Bala Usman clarified the purpose of the transactions to the Gazette despite multiple requests for comments. Mr. Dangote’s spokesman Tony Chiejina declined to confirm or deny his principal initiated the transfers.

But Ms. Bala Usman pointedly denied knowledge of the transactions to the Gazette, despite being told of the date, amount and the specific bank account with which the funds were received.

“I am not aware of any such payments made to my account,” Ms. Bala Usman told the Gazette. She declined to elaborate.

Even though Mr. Dangote and Ms. Bala Usman declined to clarify the transactions, at least two sources close to the APC campaign told the Gazette that the N200 million was part of the campaign donations channelled to the opposition campaign through proxies like Ms. Bala Usman.

Ms. Bala Usman largely restricted herself from partisan politics during the 2015 elections. She was widely known at the time as a key voice in the #BringBackOurGirls campaign — for which she was profiled by the Financial Times and other Western media outlets.

Muhammadu Buhari, Nigeria’s former military ruler, was seeking a return to power in the election that was initially scheduled for February 14, 2015. But when the exercise was postponed on February 8, Mr. Buhari’s allies flooded the country with claims that the then-ruling PDP was trying to starve them of funds.

The APC was reported to have exhausted its campaign war chest before the elections were extended for another six weeks until March 28.

The APC was, however, able to sustain the campaign until its victory on March 28, buoyed by alarming rates of insecurity, ineptitude and corruption that characterised the Goodluck Jonathan administration.

“She played a helpful role during the campaign through the backdoor,” a senior party official in APC Lagos chapter told the Gazette. “She received money towards Nasir El-Rufai‘s campaign and, by extension, the Buhari-Osinbajo campaign.”

Our sources said Ms. Bala Usman’s rapid rise through political ranks — first as chief of staff to Mr. El-Rufai in Kaduna and later as MD of NPA — was largely as a result of her political mobilisation for the then-opposition party.

“Those who have been grumbling that she was handed a juicy position like NPA even when she did not campaign with us have a minimal understanding of the role she played in 2015,” another APC source in Abuja told the Gazette this week.

At least nine transactions worth nearly N400 million went to Mr. Lawal during the 2015 elections.

Mr. Dangote himself has long endured allegations of oiling his vast industrial empire by keeping friends with people with policymakers and potential policymakers.

Two weeks ago, Mr. Dangote was widely criticised after his company received a special waiver to export its product through Nigeria’s land borders, which have been closed to all companies since August 2019.

Atedo Peterside, founder of Stanbic IBTC, criticised the government’s action as unsustainable, saying it could have a negative impact on the nation’s economy.

But the billionaire has largely brushed off the allegations, especially because evidence of his involvement in partisan politics and finance has rarely been published.

While both Mr. Dangote and Ms. Bala Usman have rights to engage in partisan politics with their time and resources, their status in the society demands that such activities should be disclosed, according to anti-corruption campaigner Halima Abdullahi.

“Personally, both of them can support anybody they like in their individual capacity,” Ms. Abdullahi said from London. “But they should be transparent with it.”

Ms. Abdullahi said Mr. Dangote was amongst a group of supposedly non-partisan statesmen who prevailed on Mr. Jonathan to concede the election in 2015 to Mr. Buhari, which made the Gazette findings “even more damning in the general context of Nigeria’s democratic experience.”

Ms. Bala Usman was known worldwide as a #BringBackOurGirls campaigner, but it now appeared as though her actual intention was to return Mr. Buhari to power 30 years after he was ousted in a military coup, the London-based activist said.

“If you paid attention, you would see that the Buhari government has been treating #EndSARS campaigners as opposition,” Ms. Abdullahi said. “It is because of people like Hadiza who have undermined genuine activism for partisan political gains, allowing politicians to keep tagging every civil movement as an opposition.”

“If we want governments in Nigeria and other African countries to stop seeing activists as undercover political operatives, then it has to start with getting honest people to occupy the civic space,” Ms. Abdullahi said. “But those who continue to hijack meaningful causes to advance personal agenda should also know that, ultimately, there would be no hiding place.”