Since assuming office as Gombe governor on May 29, 2019, Inuwa Yahaya has borrowed and squandered at least N55.3 billion, per state documents obtained by The Gazette. 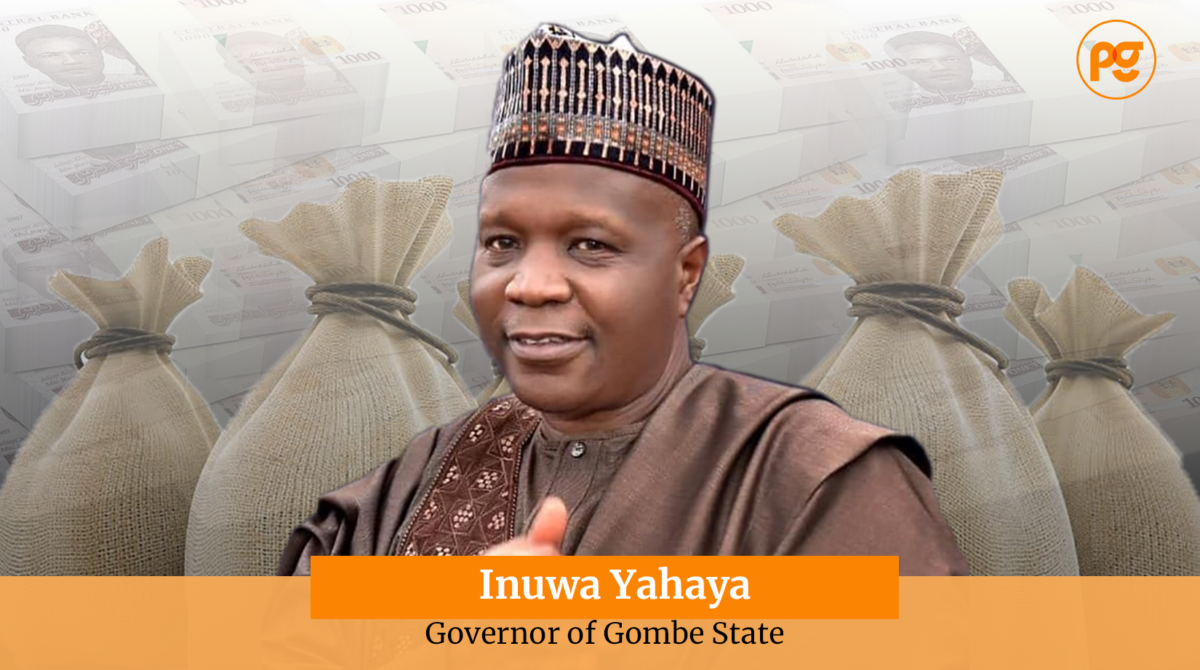 Since assuming office on May 29, 2019, Mr Yahaya has sought and received approvals to borrow N44.3 billion, according to state documents obtained by The Gazette. The governor also collected N11 billion that his predecessor Ibrahim Dankwambo applied for but which he was unable to receive before his tenure expired. The governor also has a new plan to borrow an additional N35 billion.

Checks by The Gazette revealed that the governor did not spend the loans on the projects he cited for their necessity. Instead, he cornered billions for himself, leaving a spectre of crushing debts on a state already beset by a dearth of health and education infrastructure and ranks high in poverty indices.

In documents reviewed by The Gazette, the governor was in October 2019 granted approval for loans of N10 billion and N2 billion respectively for the “provision of Infrastructural projects in the state and payment of counterpart fund requirements for accessing Federal Government of Nigeria (FGN) donor funded projects.”

But Mr Yahaya did not settle the counterpart funding after the loan was approved by the House of Assembly but used the fund to execute projects within his own official residence and offices that were contracted to individuals in his pool of fronts. The conduits have consistently helped the governor syphone state funds to jurisdictions outside the state, officials said.

Again on October 9, 2019, the governor got approval to secure N14. 5 billion from Guarantee Trust Bank to provide infrastructure, ensure payment of state and local government employees and establish an industrial park to boost the state’s internally generated revenues.

On July 9, 2020, Mr Yahaya requested approval to obtain a N2 billion loan from United Bank for Africa to provide healthcare infrastructure amid the COVID-19 pandemic. Less than N50 million of the fund was spent on the state’s COVID containment as actual support came from federal government and international relief organisations, The Gazette found.

On June 24, 2021, the Gombe House of Assembly, in a letter addressed to Mr Yahaya’s office, granted his request to obtain a N10.8 billion contract finance facility from UBA Plc.

The governor had sought the request on June 22, citing “infrastructure particularly the provision of solar street lights, biometric for the state and local government employees and pensioners as well as additional funding for the construction and renovation of some selected hospitals in the state,” as reasons for the loan.

A fresh loan of N5 billion from Family Homes Funds was requested by Mr Yahaya on July 27, 2021, at an interest rate of nine per cent with flexible tenure of either 96 or 120 months. His administration, however, settled for 96 months repayment. According to the letter sent to the state’s parliament, the funds would be used to build 1,000 units of affordable homes.

Mr Yahaya also gave the banks and other bodies that made the loans available irrevocable standing payment orders (ISPOs) that will allow the loans to be deducted from the state’s federal allocations at divergent but significant interest rates.

Mr Yahaya’s borrowing spree could further plunge Gombe — for a decade categorised as one of the poorest states in Nigeria — into impoverishment. In 2019, it was ranked ninth on the poverty headcount rate in Nigeria, at 63 per cent.

Amidst a storm of debates over value-added tax regime last month, Mr Yahaya implored Babajide Sanwo-Olu, Nyesom Wike and other southern governors to be their brother’s keeper, saying Gombe State residents could face acute hunger should there be a reform that will allow individual states to collect and keep much of their VAT receipts.

Southern governors have been waging a legal battle to reform the current VAT regime that allows Sharia states destroying beer consignments to benefit from alcohol revenues. The federal government and some northern governors have joined forces to challenge the southern states towards preserving the status quo.

“The VAT issue will have adverse effects not only on Gombe State but almost all the states of the federation,” Mr Yahaya said at an event where he was represented by Gombe finance commissioner Muhammad Magaji on September 8.

But Mr Yahaya himself has failed to put the plight of his people first, focusing instead on obtaining loans that he could deplete to expand his personal wealth and appetite for luxury destinations.

Although the governor has over time justified his borrowings, arguing that it was important to rely on borrowed funds to finance projects in the state, top officials in Gombe disclosed to The Gazette that Mr Yahaya had diverted the money.

“The governor has diverted the money he borrowed and changed most of it to dollars,” an administration official told The Gazette. “He enjoys the money in the Caribbean and European islands, and whenever he is in Nigeria, you will likely find him in Abuja and not on the ground in Gombe.”

The official, who works closely with Mr Yahaya, agreed to provide corroboration to The Gazette for this story after our reporter sent him copies of the loan documents.

“We have told his excellency to reduce his appetite for loans and focus on developing the state with federal allocations and internally-generated resources,” the senior Gombe official said. “We didn’t accuse him of corruption to his face, but we passed the message to him that people will soon ask him to explain what he did with all the funds he got approval to borrow from Gombe State House of Assembly.”

The N55.3 billion loan Mr Yahaya has so far acquired barely half into his four-year tenure did not include what Gombe has collected in federal allocation within the same period. Between May 2019 and December 2020, Gombe received N67,905,649,663.68 in federal allocations. Figures from January to September 2021 were not included because they could not be varied for accuracy prior to this publication.

The state’s revenue office also confirmed generating N8.4 billion in 2020, amidst several other streams of revenue that accrue to the state treasury periodically.

Officials said there are other loans the governor has secured and plundered using the state’s name, but The Gazette could not readily report them due to insufficient information and documents.

For over two days, both Mr Yahaya and his spokesman, Ismaila Uba Misilli, declined The Gazette’s request for comments. The governor initially promised to call back and clarify how he spent N55.3 billion borrowed from different channels, but failed to live up to his words or respond to subsequent efforts to extract his clarification.

Two members of the House of Assembly also said they could not comment on how the governor utilised approved loans even though they have constitutional powers of oversight in executive activities.

In the past month, individuals and groups have expressed their concerns about the governor’s constant borrowings for various reasons, claiming Gombe’s infrastructure and public facilities continue to deteriorate, despite earnings from IGR and Federation Accounts Allocation Committee (FAAC).

In the 2021 edition of its annual state of states report, BudgIT, a civic-tech organisation for transparency and accountability, highlighted that the northeastern state “still has infrastructure gaps in education, health and roads that need significant capital investment.”

The civic outlet recommended that Mr Yahaya should improve Gombe’s low IGR-generating capacity, which makes it “dangerously” dependent on the federal government for its recurrent revenue.

Two weeks ago, the senator representing Gombe Central, Danjuma Goje, lamented the state’s health challenge was worsening due to lack of access to specialist hospitals where ailments can be diagnosed properly and treated.

In a debate on the bill seeking to establish an FMC in Deba, Gombe, which has scaled second reading in the Senate, Mr Doje lamented the state had yet to have an FMC since the existing one was upgraded to a teaching hospital.

“In Gombe State, the story is different as there exists no Federal Medical Centre after the upgrading of the existing one to a teaching hospital; hence the passage of this bill becomes expedient to alleviate the sufferings of Gombe people,” said Mr Goje.

Gombe Good Leadership Association, a pressure group in the state, appealed to “clueless” Mr Yahaya to avoid mortgaging the state through excess borrowings in a statement last week.

“The government has on paper been awarding contracts, but we state boldly that the reality on the ground is not reflective of such contracts,” it noted. The group also said that Mr Yahaya would have borrowed and plundered at least N109 billion before he leaves office, with additional N50 billion in projected interests within the same period.