It’s obvious that the cowardly, retarded rubes that constitute Hisbah in Kano regain their moral machismo only when they confront certain kinds of people. 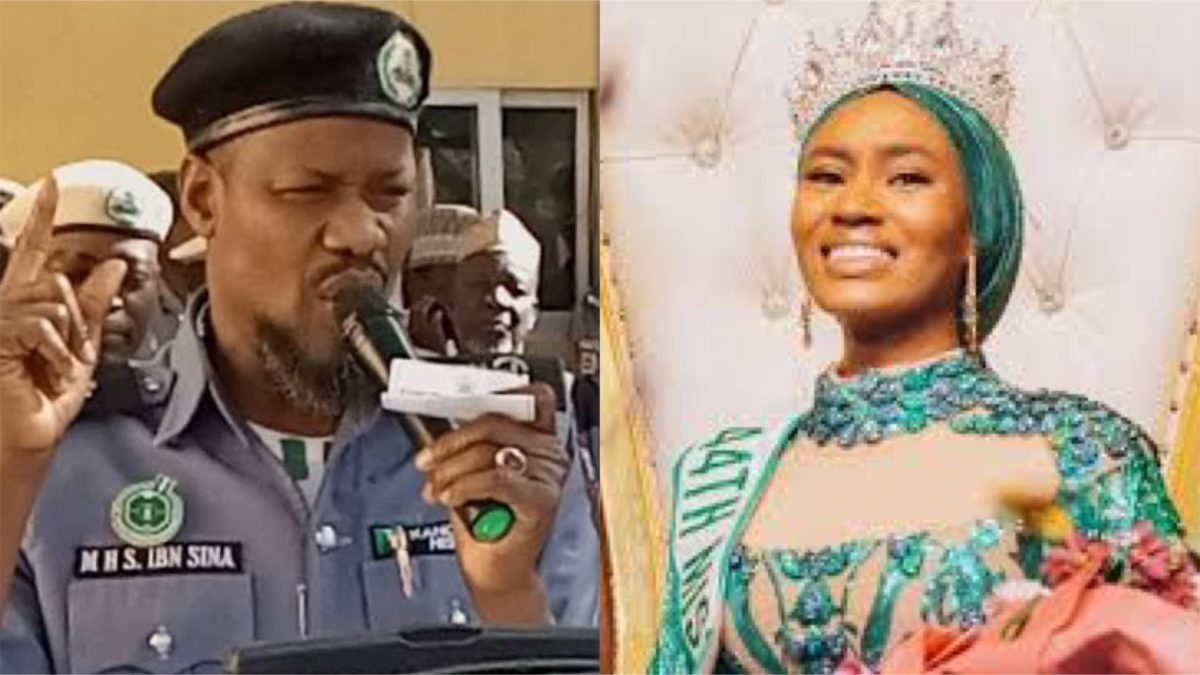 A composite of Haruna Ibn Sina, and Shatu Garko used to illustrate the story

The witless and sanctimonious mob of theocratic thugs called Hisbah whose “anti-prostitution commander” was caught pants down at a Kano hotel in an adulterous amour with a married woman in February this year, whose moral antenna shuts down when the children of the elites violate Sharia codes, whose irritating primitivism is an enduring source of embarrassment for all reasonable Muslims, has chosen to bully Shato Garko, the hijab-wearing, Kano-born winner of the Miss Nigeria Beauty Pageant.

The Commandant-General of Hisbah, Harun Ibn Sina, told the Daily Trust on December 22 that Garko and her parents would be reprimanded for participating in the beauty contest.  “The holy Qur’an said we should tell our families especially females to cover their bodies entirely because it’s the best thing for their spiritual, emotional and physical wellbeing,” he said, although Garko was all hijabed up before, during, and after the contest and is, in fact, a hijabi.

No matter, Ibn Sina, continued: “A female Muslim is not allowed to open any part of her body except her face and palms of her hands except for their husbands, children or siblings. It has come to our notice that our children are now coming out to contest for this immoral act which is not acceptable.”

Apparently, these sartorial codes are meant only for Muslim women who have the misfortune of being born by parents who aren’t prosperous and politically connected. When Fatima Ganduje, the daughter of Governor Abdullahi Ganduje, got married in 2018, she was barely clothed.

But no smug, self-righteous Hisbah goon told her to not “open any part of her body except her face and palms of her hands.” Even Sheikh Ahmad Abubakar Gumi was compelled to ask: “Where is the so-called hisbah in the state?” The Hisbah know the limits of their moral overreach. There’s a method to their theocratic lunacy.

And, of course, when the daughter of the emir of Kano got married to Muhammadu Buhari’ son, Sharia protocols and Islamic sartorial norms were not only openly and wantonly breached, we also saw videos of the scions of the upper crust of northern Muslim elites loudly repeating and dancing to sexually explicit lyrics of notoriously raunchy pop songs. But the rabid, holier-than-thou Hisbah gawks who pounce on poor or politically unconnected women at the slightest opportunity looked away.

It’s obvious that the cowardly, retarded rubes that constitute Hisbah in Kano regain their moral machismo only when they confront certain kinds of people. Sadly, they have a large admiration society in northern Nigeria where the misogynistic bullying of successful, high-flying Muslim women is a favorite pastime.

For example, in October 2017, when one Mrs. Aisha Ahmad from Niger State was appointed a deputy governor of the Central Bank of Nigeria, a horde of jealous, zealous, lecherous, and treacherous yokels descended on her like a pack of wolves for not being hijabed up in her public photos.

In an October 14, 2017 column titled “CBN’s Aisha Ahmad, Misogynistic Bullying, and Religious Hypocrisy,” I came to her defense and courted the undiluted rage of fanatics—like I did that of escapist Yoruba nationalists and unthinking Christian fanatics when I called out the continuing oppression of Yoruba Muslims in southwest Nigeria. Most of what I wrote in that column is relevant to Shatu Garko’s current bullying by the Hisbah and its supporters. These seven paragraphs from the column are particularly applicable:

“Religion in the Muslim north revolves around (1.) a sick, prurient obsession with the female body under the cover of religious decency, (2.) exhibitionistic preening of the rituals of religiosity without a care for ethics, truth, honesty, or kindness, and (3.) identity politics wrapped in and sanctified by religion.

“You can lie, cheat, murder, rape, steal, and generally be a monster of moral perversion and you won‘t attract the condemnation of self-appointed guardians of religious morality as long as you observe the communal rituals of religiosity and mouth off familiar, stereotyped religious idioms. That’s why 200 tons of date fruits donated by Saudi Arabia were stolen and sold (during Ramadan!) by Muslims [update: it turned out that the dates, worth millions of naira, were stolen by Sadiya Umar Farouq, who is now disaster minister] and there was not a whimper from people who get in a tizzy when they see a woman—however virtuous she may be—unclad in a hijab.

“In fact, a three-term governor and serving senator from Yobe State (who introduced Sharia in his state!) was recently caught almost literally pants down—and with irrefutable videographic corroboration, too— in a threesome with two women who are not his wives in a cheap, grubby brothel. There was no outrage from the self-anointed moral police. On the contrary, most of them defended the senator’s right to privacy, and cautioned against exposing a fellow Muslim to ridicule. Between being unclad in a hijab and engaging in adultery—and being impenitent about it when caught, as the senator was—which is worthier of moral outrage?

“On the other hand, you can be the very apotheosis of justice, truth, probity, honesty, compassion, etc., but if you don’t ‘perform’ religiosity through your sartorial choices and through your public utterances, you’re the devil himself. In other words, religion is more about form than content, more about appearance than substance, more about cold structures than essence, and more about public performance of group identity than about the internalisation and performance of genuine piety.

“Every Muslim woman who falls short of the standards of sartorial modesty enshrined in Islam is invariably described as being ‘naked’ and condemned as a ‘prostitute.’ Such a woman’s moral character is irrelevant as long as she violates—or is thought to violate— this sacred sartorial code. But she can be morally debauched and be the proverb for cruelty, and she would be celebrated (or at least be allowed to live in peace) as long as she wears a hijab, knows her ‘place,’ performs the identity rituals expected of her, and doesn’t make a public show of her debauchery. In other words, a Muslim woman’s entire worth is measured by her dressing….

“The self-proclaimed male moral police who are fixated with what Muslim women wear and don’t wear won’t admit that if they, too, are judged by the standards and requirements of the religion they purport to defend they’d all come up short. All of us would. Most of them don’t lower their gaze when they encounter women (which is precisely why they pervertedly proclaim the ‘nakedness’ of clothed women and assume them to be ‘sex workers’), they patronise banks that traffic in riba, have pre- and extra-marital sexual liaisons, etc. Why do they think their own transgressions are more tolerable and more defensible than a Muslim woman’s choice to not wear a hijab?

“This is not a repudiation of the dress code prescribed for women in Islam. It’s just an admission of the fact that we’re all imperfect beings. We all have strengths in some areas and weaknesses in others. It’s unfair to estimate people’s entire worth by just one weakness.”

A Professor Lawal Ajibade of LAUTECH in Ogbomoso was recorded telling female Muslim nursing students never to wear the hijab. He then proceeded to physically strip a married Muslim woman of her hijab in public to show an example.

On December 6, Yoruba Muslims recorded two students of the Igboye Community Secondary School in Epe, Lagos State, being denied the right to take their exams just because they wore hijabs! Earlier, in the Community Grammar School, Papa, in the Iwo Local Government Area of Osun State, the principal instructed Hijabed students to always take off their head covering before entering the school.

A Yoruba Muslim organisation called Ta’awunu Human Rights Initiative keeps a record of the systematic oppression, harassment, and intimidation of Yoruba Muslim women and issues periodic press statements about this, which all the major Southwest media routinely black out.

For instance, it said the Federal University of Agriculture in Abeokuta officially banned the hijab and the niqab. At the Obafemi Awolowo University School of Nursing and Midwifery, female Muslim students were bludgeoned into signing an undertaking that they would never wear the hijab. The examples are legion.

It’s really simple: if you want the hijab, encourage your wives and daughters to wear it, but you have no right to insist that others (whom you don’t feed) must wear it. If the consequence for not wearing it is hellfire in the hereafter, only the people who violate it should worry about that. On the other hand, if you don’t like the hijab, don’t let your daughters or wives wear it. You have no right to deprive other women who like it of their prerogative to wear it. Live and let live.