The driver of the vehicle was speeding before losing control and ramming the bus into the median. The bus somersaulted and burst into flames. 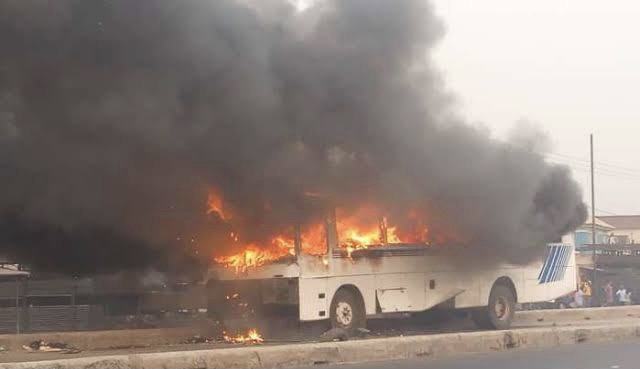 Bus on fire used to illustrate the story

Four people were burnt to death on Friday while 16 others sustained injuries in a lone automobile crash involving a Mazda bus at Oniworo, Foursquare Camp area of the Lagos-Ibadan Expressway.

Ahmed Umar, FRSC sector commander in Ogun confirmed the crash in Abeokuta. He said the incident occurred at 7:50 a.m.

He added that the driver of the vehicle was speeding before losing control and ramming the bus into the median. The bus somersaulted and burst into flames.

“A total of 20 persons were involved; four burnt beyond recognition while one female and 15 men were injured,” said the FRSC commander.

Mr Umar also disclosed that the injured victims were taken to a hospital at Ogere in Ogun.

He advised motorists to always obey traffic rules and regulations to avoid crashes.