He said there was a need to caution union members against speeding to avoid road mishaps. 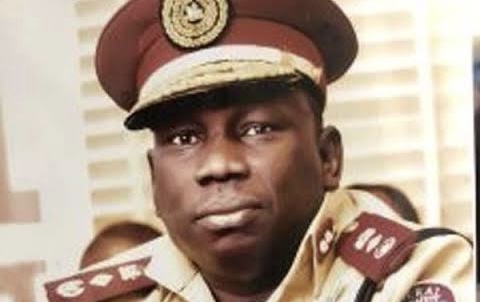 Dauda Biu, the Acting Corps Marshal of the Federal Road Safety Corps (FRSC) has again stressed the need for members of the National Union of Road Transport Workers (NURTW) to install speed limit devices on their vehicles.

He said this was a compulsory presidential directive.

Mr Biu stated this when the NURTW President, Tajudeen Baruwa, paid a courtesy visit to the FRSC headquarters on Thursday in Abuja.

He said there was a need to caution union members against speeding to avoid road mishaps.

“The impressive rehabilitation of existing roads and construction of new ones across the country by President Muhammadu Buhari administration is a giant stride.

“However, there is need to caution union members against speeding, hence making the installation of speed limit device compulsory.

“The essence of this device is to check speed and ultimately reduce crashes across the country,” he said.

Mr Biu said overloading of both goods and persons should be discouraged amongst union members, while owners should desist from tampering with the original design of vehicles.

This, he said, was common in buses through construction of additional seats to the detriment of safety of occupants.

“Avoid overloading of vehicles with goods and passengers. This could also lead to crashes. Tell your union members to comply with safety measures,” he said.

He cautioned members on the dangers of driving under the influence of alcohol, drugs and other substances, adding that use of seat belt by both front and rear passengers was compulsory.

Earlier, the NURTW President, Mr Baruwa, had congratulated Mr Biu on his appointment as the Acting Corps Marshal of the FRSC.

Mr Baruwa said the meeting was necessary for NURTW and FRSC to set the record straight on the best way to ensure better road safety culture across the country.

He said NURTW as a critical stakeholder in road safety management always admonished its members to comply with FRSC safety rules and regulations.

He, however, said the speed limit device had always been the problem faced by the union members.

“We are not financially buoyant and we are managing ourselves. We are not rich. By the time we pay for fuel, pay for dues on the road, repair our vehicles, the money left with us won’t get us anywhere.

“But we will always try our best to comply with the rules and regulations, while we also seek federal government support to help the transport sector in all areas.

“We will work with you and when we need help, I am sure you will also help us,” he said.