Fulanis are the bandits kidnapping, killing people in Nigeria: Masari

Governor Aminu Masari of Katsina says bandits kidnapping for ransom and killing Nigerians in the North are Fulanis. 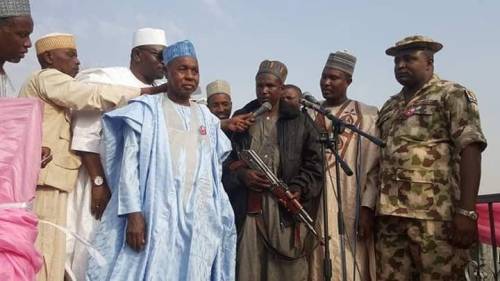 Governor Aminu Masari of Katsina says bandits kidnapping for ransom and killing Nigerians in the North are Fulanis.

Mr Masari, whose government before now entered into amnesty negotiations with bandits, revealed this while speaking on Channels TV on Monday.

But the Katsina governor insisted: “They are people who speak the same language like me, who profess the same religion like me. So what we have here on the ground, these bandits, they are not aliens.”

He admitted, though, that the Fulani bandits might have come from other African countries.

“They are people we know. They are people that have been living with us for 100 years,” Mr Masari further explained. “The infiltration we have from other African countries are also people of Fulani extraction.”

Last August, the governor lamented that 10 out of 34 local governments in Katsina were under the control of the bandits.

Mr Masari has repeatedly told northerners to defend themselves with anything they could lay their hands on, admitting his helplessness in tackling the bandits.

In desperation, he once urged Katsina residents to use their teeth to fight the bandits.

In June, bandits gunned down a Nigerian Air Force jet in Zamfara and also launched an attack on Nigerian Defence Academy in Kaduna State, killing three and abducting one.