Mr Abiodun made the call at the 67th Annual Convention of the Foursquare Church in Nigeria, held at the church’s National Camp in Ajebo. 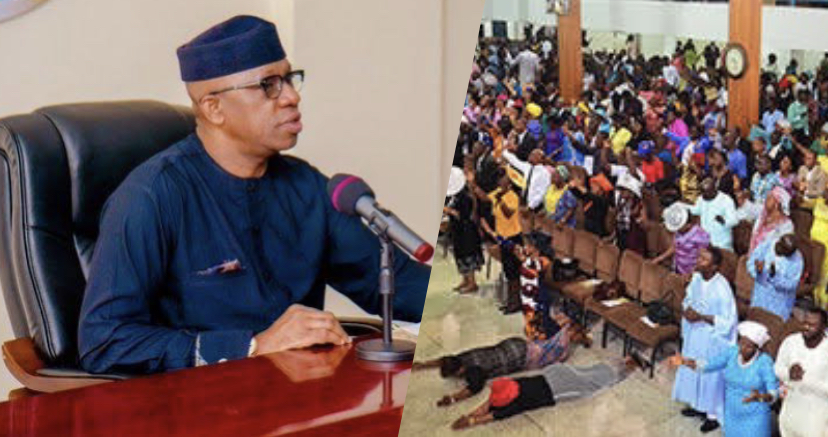 Governor Dapo Abiodun of Ogun on Sunday called on Christian leaders in Nigeria to use their sacred altars and sermons to promote the unity of Nigeria for the benefits of the country and its citizens.

Mr Abiodun made the call at the 67th Annual Convention of the Foursquare Church in Nigeria, held at the church’s National Camp in Ajebo, Obafemi/ Owode Local Government area of the state.

According to him, Nigeria is going through security challenges like terrorism, banditry, kidnapping, cultism, among others, saying that the problems were surmountable.

The theme of the week-long annual convention was: “Encounter with The Supernatural” with the text taken from Gen. 32 verses 28-30.

Mr Abiodun, who turned preacher at the occasion, said: “Our churches must come alive and play their important roles, even, as our societies are afflicted with all manners of ills ranging from insurgency, kidnapping, cultism, banditry, sexual assaults and a host of others.

“The role of the church, as the conscience of the nation, is an age-long fact, which has become the guiding light for any society that desires development.

“It is, therefore, imperative that the love of God be extended to all, while people are implored to eschew bitterness.

“Moreso, the church as an organ of socialisation, is ever relevant, especially in propagating moral ethics in the society.

“For this reason, the church is enjoined to work harder in its responsibility by condemning the use of violence by individuals or groups to seek redress,” he said.

Mr Abiodun urged parents and guardians to properly monitor their wards against being an instrument of violence in the hands of the politicians in the forthcoming 2023 general elections.

The governor enjoined churches to be steadfast in praying for unity of the country ahead of the 2023 general elections.

While identifying the convention as a platform to appraise the growth of the church, Mr Abiodun urged leadership to position the future developmental goals of the church within the broader spectrum of the general society.

He assured them that his administration would continue to promote religious tolerance among various religions that exist in the state, as well as initiate programmes to enhance mutual understanding and respect for the rights of worship of all religious beliefs.

“The church must be proactive and promote positive ideals, virtues and values that will help us optimise the developmental opportunities being created by the existing democratic platform in the state.

“Our government is determined to ensure the successful implementation of the “Building our Future Together” agenda and individual prosperity for all our citizens,” Mr Abiodun said.

In his sermon, Reverend Sam Aboyeji, the General Overseer of the organisation, at the Service of Grace/Annual Thanksgiving Service, spoke on the five keys to “Sustain and Retain Your Encounter”.

Mr Aboyeji, who spoke on the theme: “Encounter with the Supernatural”, called on political leaders in the country to hand over the challenges of Nigeria to God for divine encounter.

He also called on Nigerians to always speak positive things that would unite Nigeria and act accordingly.

Speaking on the key text taken from the Book of Gen. 32 verse 28, Aboyeji said an encounter could happen in every area of human lives.

According to him, every encounter with Jesus resulted in testimonies like the case of

The general overseer commended the Governor of Ogun and Seyi Makinde of Oyo State, for their joint efforts in ensuring that there was adequate security of lives and property on Lagos-Ibadan Expressway throughout the period of the convention.

Mr Aboyeji, therefore, specifically thanked Mr Abiodun, for honouring the invitation, saying that he was the first governor in the state to attend the programme.

According to him, it was held amidst other prevailing prayers, which had been offered unto the Lord at various places/times/months during the year 2021/2022.

Mr Olowe, who was among the 86 newly ordained ministers, said that the camp environment had been prepared for maximum impartation and comfort via weed clearing, fumigation of the premises, tight security, adequate light and water supply.

However, the a week-long programme witnessed ministrations from Bishop Wale Oke, the President of Pentecost Al Fellowship of Nigeria (PFN) and Dr Paul Enenche of the Dunamis Church.

It also witnessed the appointment of new key national officers into the organisation’s board, National Executive Council (NEC), ordination of 86 pastors to the status of Reverend, senior pastors.