Mr Masari said that he was “sure posterity will judge” his administration well. 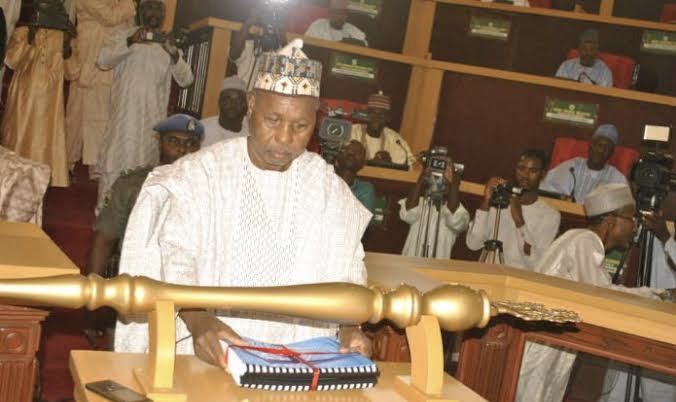 Governor Aminu Masari of Katsina on Tuesday wept while presenting the final budget of his administration to the state House of Assembly.

The government proposed over N288.63 billion as the state’s budget for the 2023 fiscal year.

The proposal tagged ‘Budget of Transition’ earmarked 63.77 per cent as capital expenditure and 36.23 per cent for recurrent services.

He said the budget would be financed from the opening balance of N12.06 billion, N62.59 billion internally generated revenue and over N119 billion expected from the federation account.

“It is important to note that the 2023 recurrent revenue has increased by 7.3 per cent over that of the 2022 revised budget.

“And the capital expenditure in the 2023 budget has decreased by 20.92 per cent due to a drop in capital receipts.”

He explained that N138.163 billion of the capital estimates would finance projects under the government restoration plan.

The governor said the plan was in the areas of education, health, water resources, agriculture, environment, works, housing and transport sectors.

“As a result, therefore, the 2023 budget has provided an adequate allocation of funds to the priority sectors of the state government (Capital) as follows:

He said other MDAs were allocated N45.88 billion.

The governor believed that his administration had done well “within the available resources to uplift the people’s living standard.

“I am sure posterity will judge our government on the meaningful projects, programmes and policies implemented during its tenure as the government of Katsina State.”

The Speaker of the assembly, Tasiu Maigari, assured that the assembly would speed up the approval of the budget.