The programme is targeting at least 5, 000 people for free eye surgery. 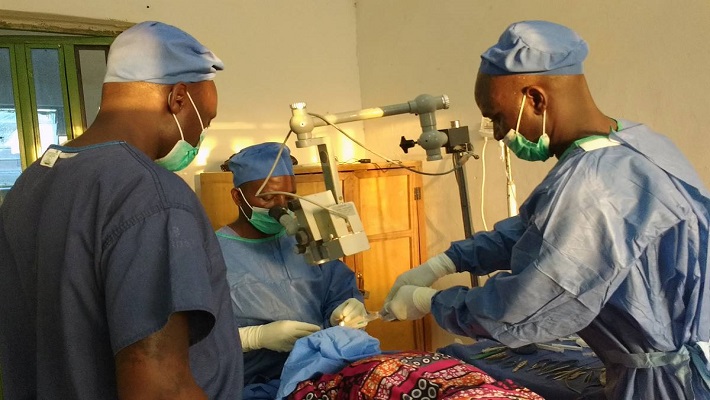 A patient undergoing eye surgery used to illustrate the story

The Federal Government says it is collaborating with Gombe State Government and Amen Healthcare and Empowerment Foundation to eliminate neglected tropical diseases (NTDs) in the state.

Chukwuma Anyaike, a coordinator of the programme, said the meeting was to plan for the commencement of 2020 Mass Administration of Medicine (MAM) for Schistosomiasis, Lymphatic Filariasis and Onchocerciasis diseases.

Mr. Anyaike said that since the three NTDs were endemic in Gombe state, the partnership was needed to eliminate the diseases, adding that both preventive and curative medicines would be distributed.

He said that this year’s administration of drugs would be done from house-to-house in strict adherence to the COVID-19 protocols, and therefore urged residents to cooperate with the drug distributors.

“We have a target; for Lymphatic Filariasis and Onchocerciasis, we are expected to treat 80 per cent of the target population in the endemic communities.

“For Schistosomiasis, we are expected to treat at least 28 per cent of school-age children (ages 5 to 14). The medicines are donations from the World Health Organisation (WHO),’’ he said.

Rita Oguntoyinbo, a health expert, said the training for the health workers embedded in the meeting, as well as and the year  2020 MAM for NTDs, would go a long way in strengthening the community health system across Gombe.

She said the exercise would benefit communities across the 11 Local Government Areas in Gombe State because  medicines would be distributed from house-to-house.

She added that no fewer than 5, 000 persons were being targeted for free eye surgery, and that over 1, 200 persons had benefitted from last year’s programme before COVID-19 restriction halted the exercise.