NGF has kicked against the ownership structure of the newly formed NNPC Limited that gives control only to the federal government instead of all the tiers of government. 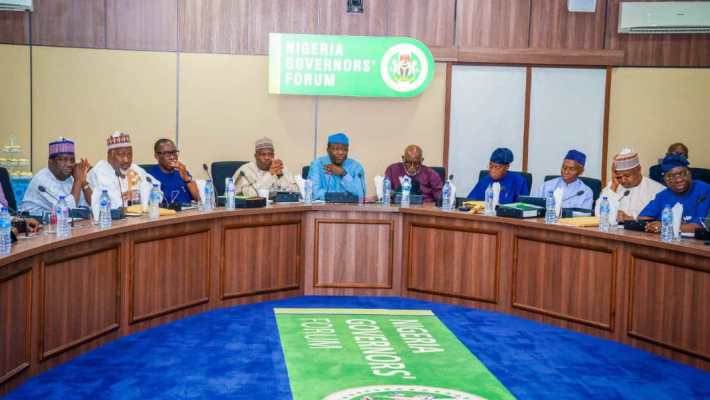 The Nigeria Governors’ Forum (NGF) has kicked against the ownership structure of the newly formed NNPC Limited that gives control only to the federal government instead of all the tiers of government.

On the Petroleum Industry Bill (PIB), the governors expressed their support for the unbundling and commercialisation of the Nigeria National Petroleum Corporation (NNPC) but concerned about the proposed ownership structure of the NNPC handed to the federal government.

“For now, the institution that is positioned to carry out this mandate is the Nigeria Sovereign Investment Authority (NSIA).

“This amendment, as well as the proposed three per cent share of oil revenue to host communities and 30 per cent share of profit for the exploration of oil and gas in the basins, will be responded to at relevant channels, including the National Assembly and the National Economic Council (NEC),” the forum said.

The NGF has also approved a uniform template for implementing the Memorandum of Action on financial autonomy for state legislatures and the judiciary.

The NGF disclosed this in a communiqué signed by Governor Kayode Fayemi of Ekiti in Abuja after its 32nd teleconference meeting.

It noted that the template was signed with the Judiciary Staff Union of Nigeria (JUSUN) and the Parliamentary Staff Association of Nigeria (PASUN) to facilitate the implementation of financial autonomy for the state legislatures and judiciary.

The template was developed following a joint meeting of the attorneys general and finance commissioners held on June 25, at the behest of the NGF. The governors expressed concern over certain proposed amendments to the Principal Stamp Duties Act by the Senate.

It noted that the amendment sought to remove the powers to administer and collect stamp duties from the Federal Inland Revenue Service or their state counterparts, depending on the nature of the transaction, to the Nigeria Postal Service.

“The provisions of Section 163 of the 1999 Constitution requires that Stamp Duties on transactions between a company and an individual should be paid to the FIRS and returned to the state of derivation”, the governors pointed out.