How we’re addressing shortage of teachers in North-East: Officials

Education officials in some northeastern states have given an insight into how they are tackling the challenge of teacher shortages in their respective states. 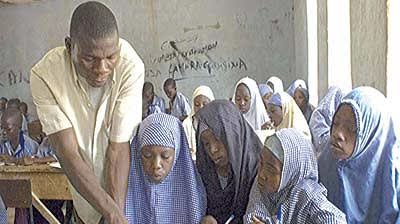 Teacher used to illustrate the story

Education officials in some northeastern states of Adamawa, Bauchi and Gombe have given an insight into how they are tackling the challenge of teacher shortages in their respective states.

The Adamawa State Universal Basic Education Board (ADSUBEB) said the board has trained 4,458 teachers, provided 15,660 sets of furniture to primary and junior secondary schools.

ADSUBEB director, Salihi Ateequ, on Sunday in Yola, said the board has also distributed 140 mattresses and 840 chairs for early child care.

Mr Ateequ said these were part of the measures taken by the state government to provide a good working environment for teachers in public schools with the hope of attracting new hands in the future.

He said the state government had also constructed 97 three-block classrooms and renovated 119 schools across the 21 local government areas of the state in 2021.

In Bauchi State, Aliyu Tilde, Commissioner for Education, said the state government would adopt modern teaching methods to address the problems of manpower shortage in schools.

Mr Tilde said that other measures employed by the state included recruitment of additional teachers and the introduction of online teaching programmes.

According to him, the digital passport device entails adopting information and communication technology gadgets to teach students online.

“Teachers will be teaching students online on core subjects,” he said, adding that the state had a 19:1 student-teacher ratio, which he said is comparatively good even in advanced climes.

According to statistics released by the commission, Bauchi State has 215 senior secondary schools, 6,110 teachers, and over one million students.

Also speaking, Ahmed Madugu, director of School Services, Ministry of Education, Gombe State, attributed the manpower gap to the high rate of retirement of teachers in the state.

Mr Madugu said that plans were underway to recruit more teachers through the Teachers Service Commission in the state.