I didn’t send my aides to condemn Deborah Samuel’s murder or sympathise with her family: Atiku

Atiku has distanced himself from a message of condemnation and sympathy over the gruesome murder of Deborah Samuel, a Christian female student of Shehu Shagari College of Education in Wamako. 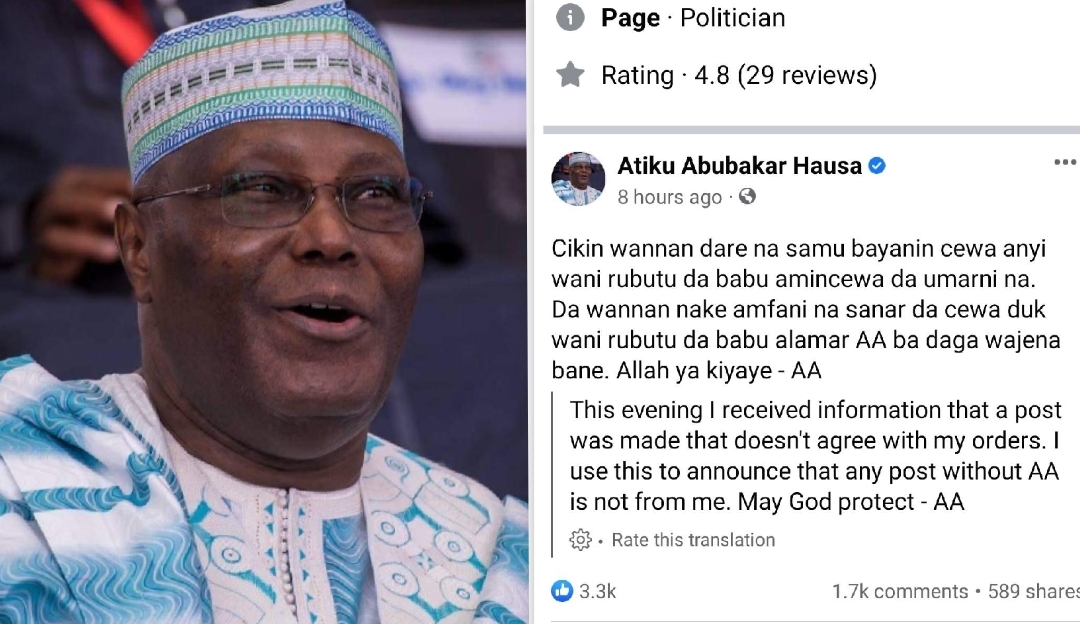 Atiku Abubakar, a former vice-president and presidential aspirant of the main opposition PDP, has distanced himself from a message of condolence and sympathy over the gruesome murder of Deborah Samuel, a Christian female student of Shehu Shagari College of Education in Wamako.

“This evening, I received information that a post was made that doesn’t agree with my orders. I use this to announce that any post without AA is not from me. May God protect – AA,” Mr Atiku wrote on his Facebook page.

Peoples Gazette earlier reported Mr Atiku’s deletion of posts syndicated on his Facebook and Twitter pages about the slain student after receiving a barrage of threats from religious fanatics who asked him to forget his presidential ambition.

The comments, mainly from fundamentalists, warned the politician to stay away from condemning the murder of the Christian student.

Mr Atiku, succumbing to the threats, distanced himself from the posts in a quick rebuttal. He blamed his social media handlers for posting without his consent.

This is not the first time Mr Atiku would refrain from condemning acts of violence perpetrated by religious fanatics.

In 2020, a Sharia court in Kano sentenced Sharif Aminu to death for singing a blasphemous song against the holy prophet.

Mr Atiku, known for his strong reactions against social injustice, kept mum in the face of widespread criticisms demanding Mr Aminu’s release. His silence provoked the ire of many Nigerians.

“Atiku has an opinion about everything except on the death sentence passed on that young fellow by a Sharia Court in Kano 4 blasphemy,” a Twitter user, @MalachyOdo1, had said. “He doesn’t want to offend the extremists whose votes he needs 2moro. A pity.”

Meanwhile, a Sokoto government official has threatened that more Christians in Nigeria will be murdered if they say things considered disrespectful to their revered Prophet Muhammad, following the gruesome killing of Deborah Samuel, a Christian female student of Shehu Shagari College of Education, Wamako.

Specifically, Anas Mohammad Sani, who, according to his Facebook bio, is a personal assistant to the Sokoto finance commissioner, had asserted that Ms Samuel was brutally murdered because she was reckless with her tongue.

Justifying the gruesome murder of the female Christian student, Mr Sani said, “The earlier our Christian brothers and sisters understand this, the better for all of us. May the recklessness of our tongues never drive us to (an) early grave.”

The so-called Sokoto government’s aide doubled down on Friday morning, censuring those outraged by the murder of the Christian student.

“We have just a life to live and enjoy. We can make noise on Twitter and condemn the mob action using the Queen’s English. However, that cannot bring back Deborah back to life. More so, if anyone will repeat it tomorrow, the probability of being served same meal is 99.9%,” Mr Sani declared.