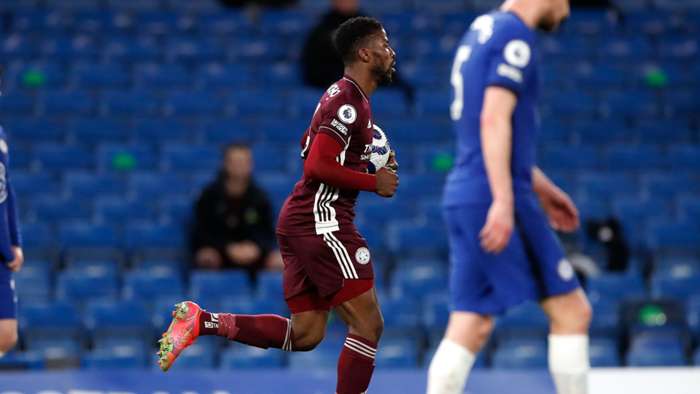 With Tuesday’s goal, Iheanacho became the first ever player to score on every day of the week in a single Premier League season. The effort takes the Nigerian forward’s goal tally to 12 this season.

Chelsea were wasteful in front of goal throughout the match as they had 16 shots with only four being on target.

Timo Werner continued his disappointment repeatedly falling into Leicester offside traps as he had his first half goal canceled for an offside and another got ruled out by the VAR for handball.

Antonio Rudiger scored the first goal of the match five minutes after the restart. The goal further raised the tempo of the game with both sides seeking to kill off the game.

Timo Werner was then fouled by Leicester’s Fofana in the 65th minute at the edge inside the box which got Chelsea a penalty which was converted into a goal by Jorginho in the 66th minute.

Kelechi Ihenacho was introduced into the match in the 70th minute for Maddison in a move by Brendan Rodgers to pull a comeback.

Reece James’s pass to Jorginho was snatched by Wilfred Ndidi who quickly passed to an unmarked Iheanacho who shot the ball past Edouard Mendy to score the goal in the 76th minute.

Ngolo Kante was withdrawn for Mateo Kovacic after just thirty minutes due to a knock with Thomas Tuchel attempting to save him for the Champions League Final against Manchester City later in the month.

Chelsea now comfortably sit in third place with 67 points while Leicester dropped to fourth with 66 points and Liverpool on 5th with 63 points with an outstanding game in hand.