Mr Hassan said the weapons and ammunition were recovered during various operations by troops of Operation Delta Safe in the Niger Delta. 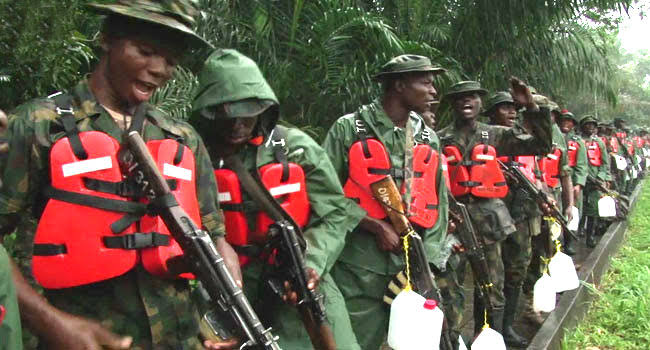 The Joint Task Force (JTF) operating in the Niger Delta on Monday handed over hundreds of small and light weapons to the federal government.

Rear Admiral Aminu Hassan, the commander, JTF South-South Operation Delta Safe, handed over the firearms to the National Centre for the Control of Small Arms and Light Weapons (NCCSALW) in Port Harcourt.

Mr Hassan said the weapons and ammunition were recovered during various operations by troops of Operation Delta Safe in the Niger Delta.

“We were able to achieve this by adopting both kinetic and non-kinetic approaches at community, local government and state levels.

“These approaches recently led to the recovery of large, small arms and light weapons from criminal elements that are on display and will be handed over to NCCSALW,” he said.

Mr Hassan said OPDS had so far recovered 3,551 small and light arms since it commenced the operation in 2016.

“Consequently, we have arrested numerous suspects, including oil thieves; recovered weapons and prosecuted those fanning embers of crises in our joint operational area.

“We achieve this through several raid operations on criminal hideouts, rescue operations, cordon and search as well as patrols on both land and waterways.

“Therefore, anybody that knows that he or she is not entitled to bear weapons or already in custody of weapons should quickly hand them over to us,” he said.

Receiving the weapons, the NCCSALW zonal coordinator South-South, Effiok Obot, commended the OPDS for its collaboration with the centre.

He said the centre would immediately profile the weapons and destroy them in compliance with its mandate.

According to him, the federal government was concerned over the proliferation of illicit weapons in the country and was committed to mopping up weapons.

“We have partnered with the Armed Forces, the Police, paramilitary agencies and the general public to mop up small and light weapons in the country,” he said.