The reigning European champions maintained their unbeaten record against Turkey, having now avoided defeat in all 13 meetings. 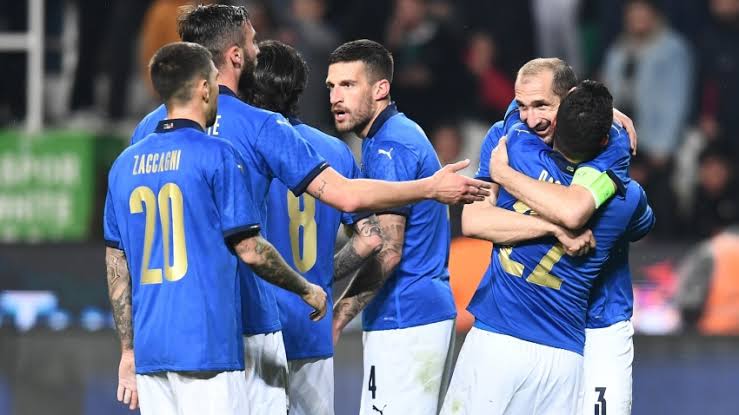 Giacamo Raspadori scored twice as Italy bounced back from their 2022 World Cup qualifying disappointment with a 3-2 victory over Turkey.

In the battle of two beaten playoff semi-finalists in Konya, the Sassuolo forward struck in each half for Roberto Mancini’s side.

Cengiz Under had given the hosts an early lead that was cancelled out by Bryan Cristante’s header, while Serdar Dursun netted a late consolation for Stefan Kuntz’s men.

The reigning European champions maintained their unbeaten record against Turkey, having now avoided defeat in all 13 meetings between the sides.

Although lacking the firepower of Burak Yilmaz, who immediately announced his international retirement after the defeat to Portugal, Turkey took the lead after just four minutes.

Marseille winger Under —— on loan from Serie A side Roma —- drifted away from Giorgio Chiellini before his shot squeezed under the dive of Gianluigi Donnarumma.

Italy responded in the 35th minute as Cristiano Biraghi’s free-kick was powered home by the head of Cristante.

And the Azzurri completed the turnaround just three minutes later when Sandro Tonali fed Raspadori, who drilled past Altay Bayindir.

The Sassuolo striker grabbed his second in the 69th minute, neatly slotting home after Biraghi cushioned a looping cross into his stride.

Dursun halved the deficit when he scrambled home from a corner-kick seven minutes from time.

It then took magnificent reflexes from Donnarumma to deny the Fenerbahce striker a dramatic equaliser soon after, as Kuntz’s side suffered their first defeat in 12 on home soil.