The governor stated that investigation has commenced to determine whether the breach is an isolated case or has wider implications. 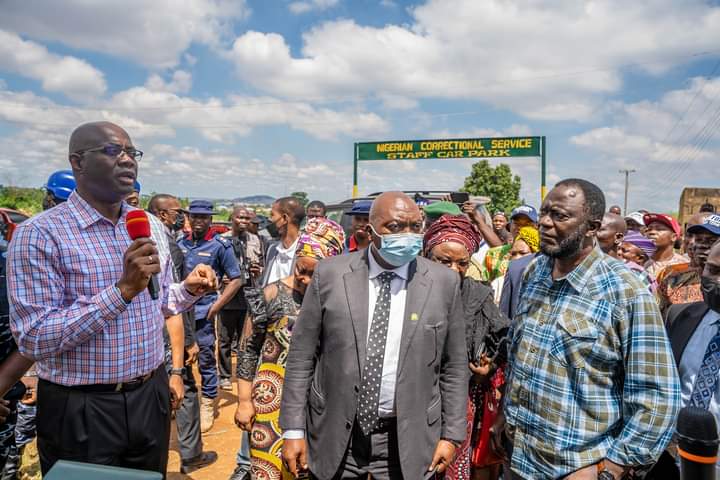 Governor Seyi Makinde of Oyo State says at least 300 inmates who escaped from the Abolongo Correctional Center are still on the loose and must be apprehended.

Mr Makinde disclosed this when he visited the prison facility on Sunday after unknown gunmen bombed the centre to free some inmates on Friday night.

“We still have almost 300 criminals that are on the loose in the state. So, efforts will still continue to try and apprehend the criminals and bring them back here,” he stated

The governor stated that investigation has commenced to determine whether the breach is an isolated case or has wider implications.

“In the main, investigation is still ongoing and we cannot say precisely whether this is an isolated event or the beginning of a wider issue that we have to deal with.

“But whatever the case is, we have made an assessment and taken some immediate decisions.

The governor ordered that Closed-Circuit Television (CCTV) cameras be installed in all the correctional facilities in the state. The security cameras will be linked with the state’s security situation room.

He said that his government would take immediate steps to protect the facility and also directed that the main road leading to the place be immediately graded.

He appealed to the general public, especially residents of the state, to be calm.

“This is shocking, unfortunately; we lost a soldier and an Amotekun operative, also another person is on the danger list at the University College Hospital (UCH), Ibadan, as we speak.

“We have challenges around the country; banditry, insurgency and terrorism.

“And we can only deal with those issues when we have the people in alignment with what the leadership is trying to do.

“So people should please believe that their leaders will tell them the exact situation of things at the appropriate time.

“Also, we are making a list of critical state assets that we need to monitor and I have also asked that the entrance and exit points into the state be monitored,” Mr Makinde said.