Mr Okowa said rule of law and freedom of expression has now become an “expensive commodity” in Nigeria. 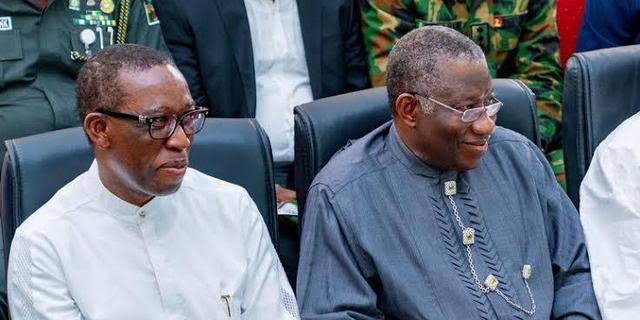 Governor Ifeanyi Okowa of Delta has described the government of former President Goodluck Jonathan as the best in rule of law and freedom of expression in Nigeria’s history.

“Your administration will long be remembered as the government that practised rule of law and respected freedom of expression which has long become an ‘expensive commodity’, if not ‘off-the-shelf’ in recent times in our polity,” Mr Okowa said.

In a statement by his Chief Press Secretary, Olisa Ifeajika, in Asaba, the governor commended Mr Jonathan who clocked 64 years on Saturday.

He said Mr Jonathan’s meteoric rise in international diplomacy and entrenchment of peace and democracy in the continent had been impactful and resonating.

The governor remarked that the former president’s role as ECOWAS Peace Envoy in Mali remained outstanding and laudable.

According to him, Mr Jonathan’s exemplary conduct and peaceful disposition aided deep institutionalisation of democracy and improvement of elections, particularly in Nigeria, through his personal sacrifice and leadership-by-example.

“On behalf of the government and people of Delta, I congratulate our leader and ebullient statesman, Dr Goodluck Jonathan, as he celebrates his 64th birth anniversary.

“Your Excellency, it gives me pleasure to celebrate you for your laudable role in deepening democracy in our dear country and Africa.

“As our dear former President clocks 64 years today, it is my prayer and that of numerous Nigerians, that God will continue to strengthen you in your commitment to ensuring greater peace, good governance and enduring democracy in Nigeria and Africa,” Mr Okowa said.