Footage said to be from the incident contained blood spills in Mr Igboho’s living room; while cars and other valuable assets were also destroyed. 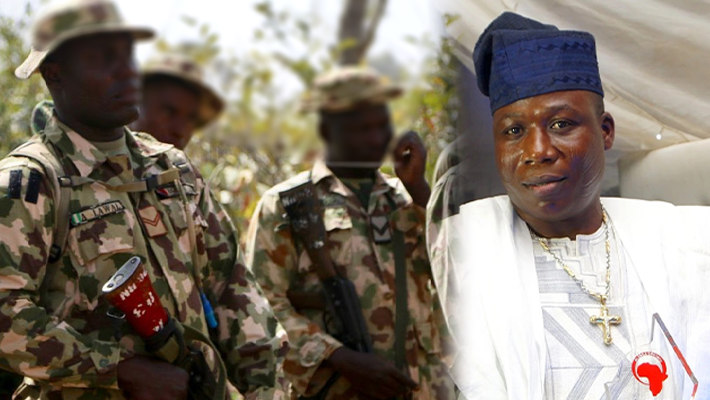 Suspected Nigerian military personnel have attacked the residence of Yoruba secessionist Sunday Igboho in Ibadan, his spokesman said on Thursday.

Oluyomi Koiki said two people were killed when the men in military uniform breached Mr Igboho’s residence in Soka, just south of Ibadan city centre. Mr Koiko told Peoples Gazette that the bodies were taken away by the attackers, but did not immediately disclose the number of those injured.

Footage said to be from the incident contained blood spills in Mr Igboho’s living room. Several vehicles and other valuable assets in the building were also reportedly destroyed.

The Gazette has not independently confirmed the identity of the assailants. A spokesman for the Nigerian Army did not immediately return calls seeking comments about the violence.

The overnight attack came as Mr Igboho was preparing a major rally of separatist agitators scheduled to hold in Lagos on Saturday.

Mr Igboho did not appear to be at home when the attack occurred at about 1:30 a.m. on Thursday. He was on a trip to Germany earlier this month, The Gazette confirmed.

Mr Igboho’s campaign has been at odds with Nigerian security forces. His former residence in Ibadan was attacked earlier this year when he held rallies to demand Yoruba’s exit from Nigeria. Security forces, including operatives of the State Security Service, have clashed with Mr Igboho’s private security team during attempts to arrest him.

Nnamdi Kanu, who has been leading a similar campaign to lead Igbos out of Nigeria, was seized and returned to Nigeria under yet-unclear circumstances last weekend.